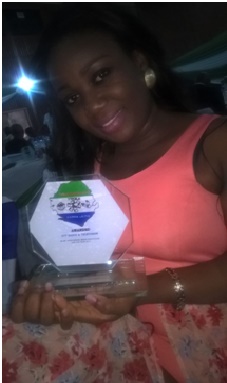 The awards were presented at the auspicious National Youth-Led Award Sierra Leone held at the Miatta Conference Hall in Freetown.

The AYV Media Empire was awarded in the category of most outstanding media institutions in Sierra Leone, alongside the Media One Center and Radio Democracy FM98.1.

The President and Chief Executive Officer (CEO) of the AYV Media Empire, Ambassador Anthony Navo (Jnr) received the prestigious award of the Leading Young Entrepreneur for the Year 2015.

Station Manager of AYV Radio, Mamaja Jalloh, otherwise known as DJ Base was awarded as a youth ambassador

DJ Base attended the event and proudly received his award; Sylvia Hebron received the award on behalf of the AYV Media Empire; while Abdul Fonti, who is the Director of Communications and Editor AYV Newspaper, received the award on behalf of his boss, Ambassador Navo, who is currently out of the country on some other engagements aimed at uplifting further the image of the Sierra Leone media.

Dr. Suma, the Acting General Manager of the media empire led the AYV team to the award ceremony.

Other Sierra Leoneans and institutions received awards in the ceremony attended by distinguished personalities from various works of life.

Dr. Sylvia Olayinka Blyden, a youth goodwill ambassador delivered what was described as a resounding statement by way of saluting the youth of Sierra Leone.

She mentioned the outstanding leadership role played by youths during the Ebola outbreak and expressed happiness that Sierra Leone is in the hands of capable future leaders.