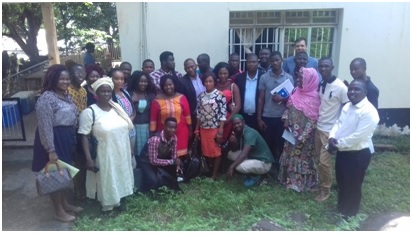 The Pay No Bribe (PNB) programme is funded with 4.7 million British pounds from UK Aid in financial support and technical assistance. The technical assistance is provided by Coffey International-UK based consulting firm, that is spearheading the civil society component of the project.

The capacity building training aimed at improving animators knowledge on animation and the PNB project, and enhancing their skills in the use of smart/android phones as they would be required to facilitate reports through the use of the phones-515 free line and the mobile app.

Addressing animators at the Conference Room of CGG, Old Railway Line, Freetown, the Executive Director CGG, Valnora Edwin said, her organization is highly reputed for excellent work, noting the animators are expected to put into the job their very best for outstanding results. She told them that, similar exercise is carried out by other CSOs and CGG would be pleased to see that animators of CGG are meeting their targets and achieving the goals set.

Explaining the PNB programme, Deputy Director Public Education and Outreach Department, ACC Patrick Sandi, underscored, bribery and corruption is harmful to the country in several ways; it reduces the services provided to citizens, since money, materials and equipment meant for the service are used for other purposes, and that it puts additional expenditure on people trying to access public services.

Mr. Sandi said, the PNB is led by the ACC and Office of the Chief of Staff with the aim to reduce small scale corruption and bribery that the people of Sierra Leone experience on a daily basis across a wide range of services noting that; the PNB enables citizens to report bribery and corruption to the ACC on the Ministries of Education, Health, EDSA, Water-GUMA/SALWACO and the SLP through 515 free line on all networks, the mobile App or website: www.pnb.gov.sl without providing their identity.

Paying bribes reduces the amount of money you have to pay for food, for housing, for clothes, and for fuel, Sandi emphasized. As animators, they should tell the people that it is important to report when they pay bribe, resist paying and meeting an honest official, he averred.

CSOs Coordinator -Coffey International, Moi Sellu, spoke on animators role and the expectations of ACC and Coffey. Mr. Sellu stressed that animators should be seen very active, and well motivated to sensitize, teach citizens how to report and facilitate reporting when deemed appropriate.  He furthered that, they should be seen as people of high integrity, otherwise, they will have no one to blame for any wrong doing.

Martin Simonsen, Technical Adviser Coffey International enlightened animators on the use of PNB phones, and more importantly the Kobo Collect tool-which is an application on the animators phones that will ensure effective monitoring and supervision as they carry out their roles and responsibilities.

The Coordinator for animators-CGG, Sahr Kendema admonished animators to treat the training very seriously. He took them through the PNB facility monitoring tool, which is aimed at determining bribe or no bribe payments at specific facilities at a given point in time for targeted and quick interventions.

Field trips to densely populated areas in the Western Area Urban, to enable the animators interact with the wider public, and sensitize them on the PNB formed part of the training.

Similar training would be held for animators in Bo and Kenema Districts in the coming weeks.