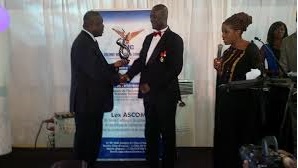 He received his new position at the annual dinner fund raising ceremony of the association. The AFYA is an association formed by the Limba clan to foster peace, unity and development amongst tribal kinsmen.

The association has been in existence since the days of the late President Siaka Stevens.

According to the Chairman of the AFYA, Chief S.A.Y. Sesay, the award of Honorary Grand Chief Patron to Mr Fadika is not a mistake but one that was thoroughly looked into by members of the association. He said a meticulous post-mortem was done on the contributions of the Vice President of Shandong Steel towards nation building. He assured the association will continue to recognise the good work of Sierra Leoneans who are bent on promoting the county’s value. He asked all Limba people to be united and put the interest of the tribe above individuals’.

Introducing the award winner, Professor Ezekiel Lakoh described Moseray Fadika as one of the country’s finest and erudite business executive directors and philanthropist, who is worth emulating, while adding that he is made up of impeccable character of humility and friendliness. He said he is a man full of empathy.

Addressing the audience, Mr Fadika reiterated the need for them to remain united as unity he said is power. He noted that for development to be sustained, “we must maintain love, societal norms, regional commitment, tribal unity and political tolerance”.

The All People’s Congress’ flag bearer-hopeful pointed out that he is committed to the core values and goals of the APC and would accept the outcome of any selection or election in choosing the party’s next presidential candidate.

Mr Fadika recounted his commitment to the development of Sierra Leone as a nation and as a people. He urged every Sierra Leonean to be steadfast in promoting the country’s ideals and core values. He charged that he will always be a friend of the people especially the youth.