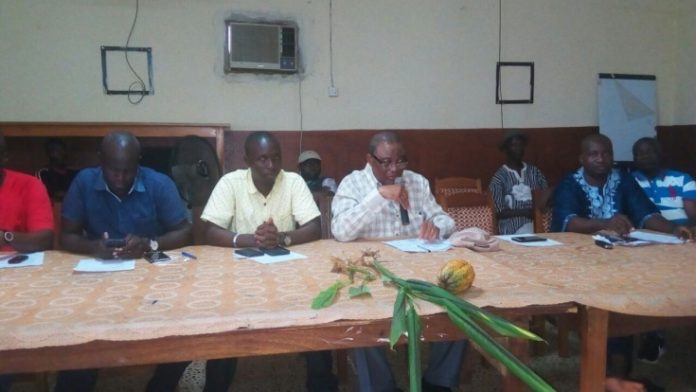 The Minister and team were welcomed by Paramount Chiefs and farmers in the three Districts. The Minister handed over Le25, 000, 000 (twenty five million Leones) cheque to the Livestock Farmers and Le25, 000, 000 to the Sierra Leone Women Farmers’ Forum (SLEWOFF) to support their agricultural activities in each of the districts.

District and Chiefdom Authorities were given the opportunity to express nice sentiments about the good initiative of the Minister to providing direct support to farmers.

The Minister took a message of commitment and hope from His Excellency President Dr. Ernest Bai Koroma to farmers. His message was centered on increasing productivity and production to enhance food self-sufficiency and economic growth in the country.

Professor Jones informed farmers and stakeholders that agriculture should stimulate growth in all sectors of the economy, and added that increasing productivity will enable them to make money. Farmers, he said should be the richest in the country if only they make good use of the country’s natural resources  and change their mindset to become business farmers.

Prof. Monty Patrick Jones said President Koroma wants to see prosperity in every Sierra Leonean and would want them to be eating food produced in the country of which agriculture has a role to make this happen.

He noted that farmers should increase productivity not only on rice but also cassava, potato, beans, cattle, cashew and other cash crops. “The next thing is to increase income by adding value to your produce and be ready to take your goods to the market,” the Minister said, and added that farmers should be made to reap benefit from their land with their own style.

He admonished them to work towards making Sierra Leone become an industrialized society. “We can achieve this if only you increase your yield and practice mechanized farming. You can get power tillers, not only tractors. When the soil is well tilled and fertilizer added to it, it will increase on the yield”, the Minister said.

Prof. Jones informed his audience that the Ministry has selected 52 Agricultural Business Centers that will be well equipped to provide effective and efficient service to farmers across the country. The government, he said is ready to engage youths and women by providing seed money for them to open their own business.

“I am here to help farmers with the best of my ability,” says Prof. Jones, and added that failure is not part of him.

The Member of Parliament in the Minister’s delegation, Hon. Aaron Koroma of the Agriculture Oversight Committee in Parliament the various meetings that one of their roles in Parliament is to provide oversight, adding that much as President Koroma has invested in agriculture,  and that the Minister will effectively discharge the vision of the President in the sector. He expressed happiness to see the Agriculture Minister taking agriculture as his own baby. The development of agriculture, he said will bring the nation out of poverty. “We will continue to discharge our oversight functions well to achieve the dream of government in the agriculture sector,” he assured.

Other speakers include Paramount Chiefs, Chairpersons of the various Councils, Women Leaders etc.  The farmers were happy and showered praises to the Minister for a job well done.