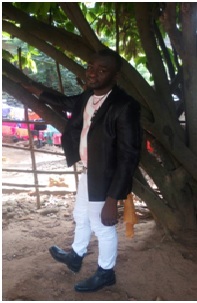 He further explained that according to their tradition the position of ArgbaAgedehis hereditary, meaning that upon Pa Alpha Kamara’s death, his eldest son, Sulaiman, should succeed him.

He revealed that in early January this year, Sulaiman and other family members traveled to their Sandato bury their father and that was when Sulaiman’s troubles started.

According to Sulaiman’s mother, YaFatmata Kamara, immediately after the burial ceremony elders of the society approached their familydemanding that Sulaimanshould succeed his father as the new ArgbaAgedeh of the Gbangbani Society.

She maintained that they were worried because the head of the society should stay in the village.

“My son was a student and I didn’t want him to be involved in such a society, as it will change him completely,” she said, adding that the meeting did not end well as Sulaiman refused to be initiated.

She disclosed that since that day she has not set eyes on her son nor heard from him.

“Whenever I ask the elders about him they will just ignore me and walk away. I fear that they may have killed him for ritual purposes,’ she further revealed.

She said that she was appealing to the Government, human rights organisations, the Police and traditional authorities to help her trace her son.

In an interview with Pastor John Jalloh, who said that Sulaiman was a member of their Church, he stated that Sulaiman approached him after the death of his father and told him that he did not want to attend the funeral service in their village for fear of his life.

“As a man of God I encouraged him to attend and give his father a befitting burial as the eldest son. I was however very shocked when I was informed that Sulaiman had been abducted and not seen again,” he noted.

He explained that they have even held several meetings with members of the society and asked them to release Sulaiman but that they have not told them anything of to indicate that Sulaimanb is still alive.He maintained that succession is a matter of choice and not force. He stressed that forcing Sulaiman into what he referred to as a demonic tradition is wrong in the eyes of God.

Areliable source inside the society has revealed to this paper that since Sulaiman escaped they are still searching for him to either take the position or face death.

A Human Rights, Mr. Ibrahim Dumbuya, is reported to have shown interest in the matter and has asked the family to assist him in his quest to save Sulaiman.