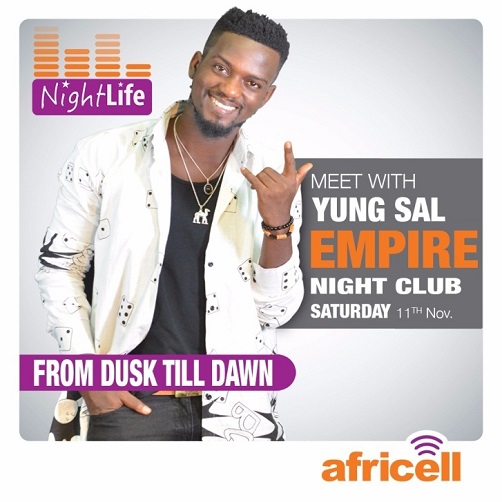 The leading telecommunications company in Sierra Leone, Africell is to sponsor one of the couintry’s renowned musicians, Abdul Salam Barrie, aka Yung Sal, who has won several awards.

African Independent Radio Station Manager, John Konte said that Abdul Salam Barrie’s sponsorship is the normal touch of Africell Night Life to reach out to its numerous valuable subscribers recalling that the company has sponsored several musical shows and concepts.

John Konte revealed that Africell always supports and sponsors several activities citing the recent Beach Volleyball Competition and the Africell Life Insurance Product launched on 23rd October, 2017 in line with the company’s proud tradition of always taking the lead at the cutting edge of technological innovation in the telecommunications industry in the country.

According to John Konte, since the inception of Africell in Sierra Leone, it has never changed its brand name even when it bought over Tigo and has always provided affordable quality service.

He further stated that Africell has transformed the lives of several people nationwide and assured that the company would continue its good work disclosing, “Africell has over 3,000,000 subscribers but our network is still the best in the country.”

Foday Swaray, an Africell subscriber, said that Africell is an household name in Sierra Leone that caters for everybody with quality service intimating that the company has continued to grow daily and underscored that it is not surprising that the National Telecommunications Commission (NATCOM) graded Africell the best provider of quality service.

He continued that he is amazed that unlike other networks, since its inception, Africell has never changed its brand name and promised to attend the Africell Night Life at Empire Night Club on Saturday 11th November, 2017 to rock and dine with Yung Sal and Africell management concluding, “Africell is the cheapest and the fastest 3G++ with new reduced data bundles.”