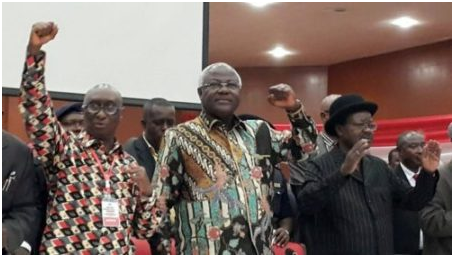 People are fed up with corrupt and inept politicians who have made their lives a misery, and yet are sending their children and wives abroad to receive better standards of healthcare and education, instead of working hard on improving what Sierra Leone can offer its people.

And to add insult to injury, the latest episode is of the wife of the minister of transport Balogun Koroma (Photo), who could be heard on an audio recording, boasting about her husband’s massive wealth, which many in Sierra Leone say is not commensurate to his salary as a government minister.

One of the ruling APC politicians tipped as one of the most likely candidate for the presidency next year – Ahmed Sesay, could also be seen on video piling close to One Hundred Million Leones on a table from a carrier bag in front of local politicians, to buy political leadership. The country’s Anti-Corruption Commission has turned a blind eye.

According to a latest story published in theconversation.com, “most African leaders have done little to improve the welfare of their people. Despite political parties offering different ideologies, nothing really changes when governments change.”

African governments are riddled with corruption, and at the centre of this is the funding of political parties. Azaaviele Liedong writes that party financiers demand a return on their investment and dictate how state affairs and funds are managed. This is Liedong’s story about how corruption and poor governance are crippling people’s confidence and faith in governments across Africa:

A few months ago, a video in which a street boy blamed bad leadership for Nigeria’s socio-economic problems, went viral on social media in the country. He called for a mass burial of the country’s political elite, which in his opinion, would help combat corruption and unlock the country’s potential.

His view echoes the inner and hidden sentiments many people living in African countries have about their leaders.

The reasons for this are not hard to find. Most African leaders have done little to improve the welfare of their people, who are very poor, while they, and their cronies, live in opulence.

The rot goes all the way through the political chain to elected and appointed public officers – starting with political parties. Party financiers and godfathers dictate who holds what public office without regard for competence and internal democracy.

They ultimately dictate how state affairs and funds are managed with barely a distinction between public and private funds. So, elections don’t seem to help, mainly as the politicians are the same. Despite African political parties espousing different ideologies and launching welfare manifestos, nothing really changes when governments change.

Corruption is prevalent throughout the continent. Tied to this is the fact that anti-corruption efforts fail because of a lack of honest and accountable leaders. Many have co-opted democratic systems, such as regular elections, or they simply make up the rules as they go along to stay in power. Behind it all lies an insatiable appetite for money, and the realisation that power can deliver untold wealth. In these scenarios, played out across dozens of countries on the continent, the state (and the people) are sacrificed to greed.

And those brave enough to stand up and be counted are driven out – either literally or figuratively.

Every year about USD$50 billion is lost through illicit transfers. Not only does this hold back the continent’s socio-economic progress, it also threatens peace, security and stability.

A recent study found that in Sokoto State, Nigeria, corruption facilitates the spread of radical ideology and induces about 70% of the youth to join Boko Haram, a group which killed 11,885 civilians between 2011 and 2016.

Whereas the ubiquity and repercussions of corruption in Africa have been widely articulated, the fight against it seems to be a fleeting illusion.

Anti-corruption measures mainly revolve around legislating to tighten loopholes, strengthening anti-corruption institutions, and empowering the media and citizens to report or stand up against malfeasance.

But the success of these measures depend on the often overlooked but crucial role of good leadership.

Willing, able and visionary leaders are required to push through sweeping reforms to curb corruption and augment public accountability. Unfortunately, such leadership is lacking in Africa.

Africa is home to despots and sit-in presidents who either abuse their power or allow abuses to be perpetrated. Countries are run like family property and political dynasties are created by fathers passing power to sons. Checks and balances are weak, dissent is crashed, and alternative views are discarded, culminating in low accountability which further deteriorates leadership and reinforces corruption.

One would expect multiparty democracy and its associated principles to produce visionary and effective leaders, but this is rarely the case in Africa. While elections are held and leaders are changed at the ballot, things usually remain the same. Oftentimes, policies and corrupt practices which were criticised by political leaders while in opposition suddenly become right and justifiable when they win power.

In essence, there may be new faces in government, but the status quo does not change. The big question is, why?

Politics in Africa is synonymous with wealth, whether acquired legally or otherwise. Hence, the scramble for power can be intense and sometimes dangerous. The expectation of quick riches increases internal competition for party candidature, which often requires deal making and vote buying.

And failure to align with the party establishment can prevent members from ascending the party hierarchy.

Party members are socialised in the same way, mainly to do whatever is necessary to win power by fair or foul means, and those who dare to think or behave differently are sidelined, sabotaged or expelled.

At the core of Africa’s corruption and leadership problems is opaque party financing. In most countries, parties rely on private funding from individuals and organisations. But regulations on financial disclosure are either non-existent or ineffective, which allows wealthy individuals, known as godfathers, to wield significant influence, mainly for their benefit but to the detriment of the state.

Even leaders perceived to be strong-willed can find it hard to withstand the pressures.

In an interview in 2016, Nigeria’s first lady, Aisha Buhari, stated that her husband does not know all of his appointees, which shows how a president can be the face of mightier but invisible forces.

In South Africa, President Jacob Zuma stands accused of being a stooge of the wealthy Gupta family.

These examples attest to how African leaders can be controlled from behind the scenes by vested interests and crooked godfathers. In some cases, the leaders are incapable of addressing the excesses of their sponsors, leading to anarchy and recklessness.

Being different is political suicide

There is a popular idiom: “do not bite the hands that feed you”. Indeed, anecdotal evidence suggests that this is true for African leaders. There is a high chance that leaders who act against the interests of their party establishment, financiers and godfathers, even for the benefit of the state, will not last long. The same applies to their policies.

So what’s the way forward? Africa must regulate political party financing and strengthen state institutions such as electoral commissions to enforce compliance.

Until then, most leaders on the continent will continue to be prone to capture and control by powerful and parochial godfathers. And the looting of public funds won’t stop.