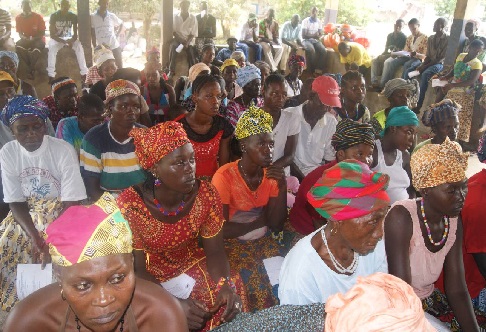 Speaking to the community people, Acting Regional Manager, ACC North, Regina Barrie stated that the aim of the PNB is to curb bribery in the public sector, in order to improve service delivery. Madam Barrie informed her audience that the PNB is a scientific tool that will gauge the bribery patterns in the Sierra Leone Police (SLP), the health, education, energy, and water sectors. She said, it enables citizens to report incidents of bribery and petty corruption experienced in service delivery institutions. The Ag. Manager noted that PNB is not prosecution-oriented; rather it requires heads of institutions through the Integrity Management Committees (IMCs) to take actions/measures that would eliminate the occurrences of bribery and petty corruption in their entities as responses to the bribery reports received on the platform.

ACC’s Public Education Officer Abdulai Saccoh in his statement described bribe as anything of monetary value which a person offers a public officer as an inducement for him/her to either abstain from carrying out his lawful duties, or fast track a process through illegal means; while noting that bribery is not only limited to money but also includes offering other material resources of value. Saccoh together with his audience highlighted a number of reasons some public officers use as an excuse for taking bribe. The Public Education Officer identified the bad effects of bribery on the lives of people in rural communities, if they allow it to flourish in their spheres of life.

Saccoh disclosed that as citizens it is their civic responsibility to partner with the ACC to combat bribery through the PNB anonymous reporting platform. He encouraged them to call 515 free on all networks to report bribery, and assured that their identities will not be known.

Earlier in the meeting, Headman Mabolleh community, Pa Musa Kamara heaped praises on the Commission for reaching out to remote communities like theirs. He guaranteed the Commission on behalf of his people that, they will at all times call the 515 number to report any bribery experience.

The display and distribution of PNB information, education and communication materials formed the high point of the meeting.