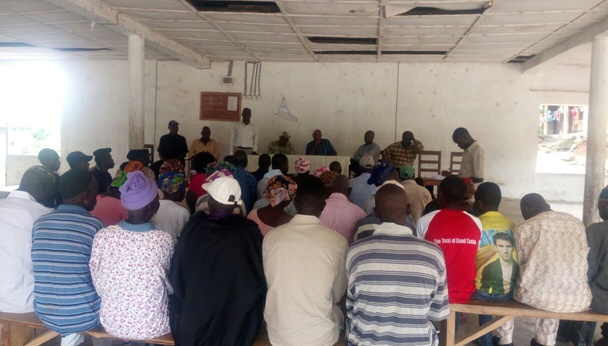 Dilating on the significance of the engagement, the Sub Regional Manager Wilfred Bangura underscored, the engagement was part of the regular activities of the ACC Public Education and Outreach Department to raise awareness on corruption. He said it was also meant to broaden the minds and open the eyes of community people to services provided to them by NGOs and MDAs at chiefdom level.

The Manager explained the significance of the Pay No Bribe (PNB) campaign rolled out in the President’s Recovery Priorities (PRP) and the progress made so far by the Commission in the fight against corruption in Sierra Leone. Mr. Bangura elaborated on the various methods of reporting corruption offences to the Commission, the protection measures and benefits for whilstblowers.  Manager Bangura encouraged the participants to report corruption to the Commission on ACC toll free lines +23277-985985/+23277-986986 for Africell, 161 for Airtel or the ACC Kono landline 022-530069. Concluding, he said the fight against corruption is a national concern requiring the involvement every Sierra Leonean.

Speaking on the President’s Recovery Priorities, the District Analyst of the President’s Recovery Priorities, Santigie Bangura mentioned that they have completed the Six to Nine (6-9) months phase of the recovery process and now in the ten to twenty four (10-24) months. He encouraged all present to show keen interest in community development activities that particularly fall within the recovery priorities. Mr. Santigie Bangura stressed that it is the business of beneficiaries to ask after projects and aids. He spoke of the strides made by his institution in relation to the propagation of the PRP initiative.

Earlier in his welcome address, the acting Paramount Chief who doubles as the section chief of Gbondu, Chief Alhaji Mohamed Gborie thanked the ACC for organizing the meeting which he said was timely. He noted that, as chiefdom, they are very willing to implement the Pay No Bribe project in the President’s Recovery Priorities. He admonished community stakeholders to be pro-active and start to direct questions to duty bearers, contractors and development partners.  The acting Paramount Chief encouraged the team to continue preaching about corruption and the penalties that accompany offenders.