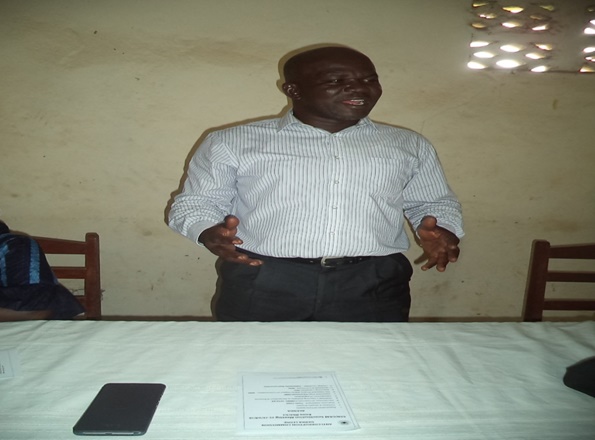 The SSN project is jointly implemented by the National Commission for Social Action (NaCSA) and the Anti-Corruption Commission (ACC); funded by World Bank and UNICEF.

Speaking at the engagements, Head, Public Education Unit, Michael Sesay, said the Commission is interested in the implementation of the SSN project and the improvement it has shown in the lives of the beneficiaries. He stated that, the beneficiaries are expected to utilize the funds for their intended purposes. He maintained that the meeting was also staged to further empower beneficiaries on their rights and responsibilities in the SSN project and to also update them on the positive role made by the Commission for a successful project implementation.

Mr. Sesay encouraged community stakeholders to support the process as the project is aimed at improving the livelihoods of extremely poor and vulnerable people in the project communities. He educated his audience on the implementation of the Pay No Bribe Campaign (PNB) piloted in the Sierra Leone Police (SLP), Ministry of Health and Sanitation, Ministry of Education Science and Technology, Electricity Distribution and Supply Agency (EDSA) and Ministry of Water Resources (SALWACO)/GUMA Valley Water Company. He added, the PNB project is yet implemented in Western Urban District, Western Rural District, Bo District, Kenema District and Bombali District.

Addressing participants at the various sessions, ACC Public Education Officer, Magnus Bendu told the participants that the engagements are meant to increase beneficiaries awareness on grievance redress mechanism. He extensively dwelled on the Grievance Redress Mechanism (GRM) component in the Social Safety Net (SSN) housed by the Anti-Corruption Commission (ACC). He dilated on the role of the ACC and beneficiaries in the SSN project coupled with the project donors-World Bank and UNICEF. Mr. Bendu emphasized that reporting suspected corrupt practices is a manifestation of fighting corruption in the society. He encouraged his listeners to report any suspected corruption practices to the ACC through the mobile lines 077-986-986 for Africell and 161 for Airtel and on the PNB free line 515.

Emphasizing on the essence of the GRM engagements, Sub-Regional Manager-ACC Kono, Wilfred Bangura told participants to utilize the SSN facility judiciously thereby educating their children, improving on their health status, ensuring they eat good food and embarking on petty trading. He called on them to report any grievances experienced during the implementation of the project to the ACC for prompt actions.

In his contribution, chiefdom stakeholder of Toli Chiefdom, Sahr Bamba registered that the SSN beneficiaries in the chiefdom are grateful to the ACC, NaCSA, World Bank and UNICEF for improving their livelihoods. He said most of the beneficiaries have constructed dwelling houses, educated their children, engaged in petty trading and farming with the judicious use of the SSN cash.

Bintu Daddy, SSN beneficiary from Mafindor chiefdom on behalf of her colleagues lauded the remarkable effort of the ACC, NaCSA and the project donors -World Bank and UNICEF for improving their lives through the project. She appealed for an extension of the project to their colleagues who are not currently not part of the scheme.

The distribution of SSN/GRM T-Shirts, and posters to participants formed part of the engagements.