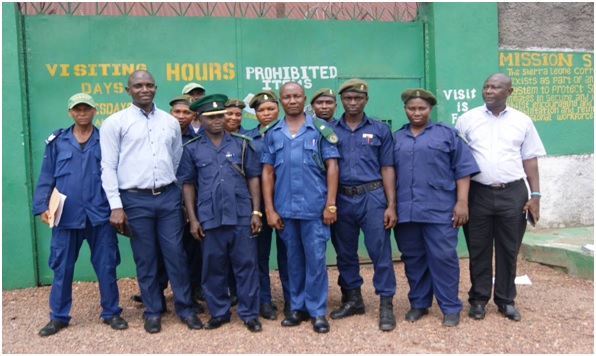 Addressing officers and the rank and file of the Service at their Magburaka office, ACC Public Education Officer Abdul K. Bangura provided update on the PNB campaign since its inception in September 2016.  Bangura told his audience that PNB is a strategic approach aimed at ensuring that systems of MDAs become effective and efficient. He informed personnel of the Correctional Centre that reports generated from the PNB portal so far indicate progress and commitment on the part of the Ministries, Departments and Agencies (MDAs) in addressing bribery complaints. The Education Officer said, one of the major factors responsible for ineffective service delivery in public institutions is bribery and petty corruption. He furthered that the situation will not change if citizens allow few selfish individuals to continue exploiting them for their own ends. He called on all the personnel to remain steadfast in placing premium on national interest above all else.

Speaking on the causes and effects of bribe, ACC Public Education Officer Abdulai Saccoh underscored the significance of the engagement and described it as a dialogue forum to spread PNB messages. Saccoh informed his audience that the recent inclusion of the justice sector in the PNB campaign puts the Correctional Service in a critical position to be part of the campaign. The Public Education Officer highlighted some of the drivers for the solicitation of bribes; lack of integrity, laziness, unhealthy competition, breach of procedures, abuse of discretionary authority, greed, lack of transparency and accountability and weak or absence of proper management and regulatory systems.

He noted that the effects are counterproductive to any country as it leads to fall in the standard of education, weak institutions, increase in crime rate, poor medical services, erosion of investor confidence, loss of much needed revenue and poor infrastructural development. Saccoh went on to catalogue some of the areas of concerns highlighted in the recent PNB reports which warrant concrete actions to be taken by the various Ministries, Departments and Agencies (MDAs). He emphasized that the campaign is not to make MDAs look bad but rather to provide them with empirical information on bribery patterns and trends in their institutions.

Saccoh explained the PNB reporting mechanism, the use of the free phone line 515 on all networks, the website: www.pnb.gov.sl, or on mobile application in major languages and stressed it is anonymous.

Earlier, the Officer in Charge Magburaka Correctional Centre, Superintendent Sulaiman Sallieu Turay heaped praises on the Commission in its effort to enhance service delivery in public sector entities across the country. Turay appealed to his colleagues to heed to ACC’s message and ensure that they support the PNB for the good of all Sierra Leoneans.