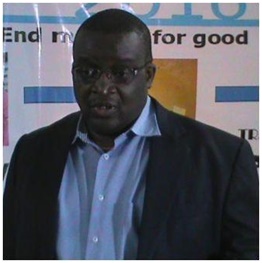 He said   malaria is caused by a parasite that is passed from one human to another by the bite of infected Anopheles female mosquitoes, imposing a significant economic burden on Africa which has the greatest number of malaria cases in the world.

Dr. Smith informed journalists that since 2000, malaria has cost Sub-Saharan Africa US$300 million each year for case management alone (WHO Malaria Report 2015).

He disclosed that households in Africa spend between $2 and $25 on malaria treatment and between $15 and $20 on prevention each month with consequent loss of resources.

Giving an overview of the World Malaria Day, the Programme Manager told journalists that April 25 is a day set aside to commemorate global efforts to control malaria and the theme of the ninth World Malaria Day is “End Malaria for Good”. He reiterated that following the great progress made under the Millennium Development Goals, it is important to build this success and end malaria for good under the sustainable development goals.

He said the overall aim of the World Malaria Day is to focus the attention of policy-makers, donor, partners and the wider public on the need to sustain progress in malaria prevention and control and continue scaling up malaria intervention towards malaria elimination.

Dr. Smith reiterated that the National Malaria Control Programme is committed to  work towards ensuring that every individual have right to access highly effective malaria preventive services and curative care delivered as close to the household as possible.

He said malaria is a deterrent to the socio-economic growth of a country, adding that World Malaria Day represents a chance for all to make a difference.