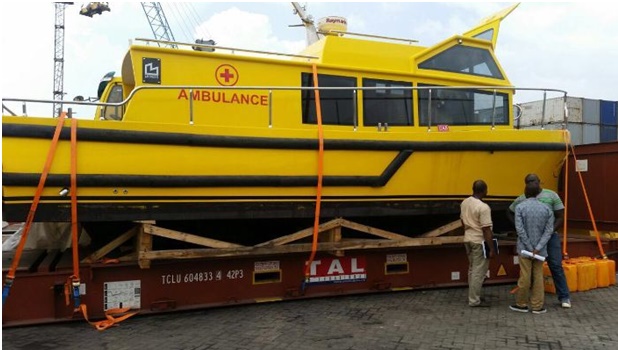 The Ambulance speed boat was procured by the Integrated Projects Administrative Unit (IPAU) of the MoFED , under the auspices of  the World bank funded Reproductive and Child Health Project Phase 2 (RCHP2) which seeks to increase utilization of a package of essential health services by pregnant and lactating women, and children under the age of five and now supporting the emergency Ebola Response. Speaking at the handing over ceremony in Bonthe,the Project Coordinator of the IPAU, Alpha Sesay stressed that the ambulance speed boat will increase the DHMT’s service coverage and timely response to primary health services for people; mostly pregnant women, lactating mothers, under five children, and other persons living in the difficult-to-reach riverine areas within Bonthe District.

The World Bank task team leader (TTL) of the RCHP2, AyodejiAkala said that it had been a long journey and the World Bank was quite delighted that the ambulance boat was beingdelivered to the Bonthe DHMT. The TTL said the ambulance boat was very important as Sierra Leone is the country with the worst maternal and child health indicators in the world, primarily because women have poor access to medical services or access it too late. She said the provision of this medical transport is an opportunity to not only identify cases that needed early treatment, but also to transfer these cases to the appropriate levels of service. She therefore stressed that a lot of effort is actually needed to make sure that thehealth indicators and outcomes of women and children and others in society is improved. She implored on stakeholders to use the boat for the intended purpose and ensure that it is maintained and operated routinely.

Dr. SAS Kargbo, Director of Policy and Planning said this was a time for celebration as the ambulance boat had been “a long time coming” since 2010 when the Government of Sierra Leone conceived the idea to increase access to reproductive and child health services and brought about the free health care idea, and abolished the fees for pregnant and lactating women to access healthcare services.  He said the provision of the ambulance boat was timely as a key priority area for the Government of Sierra Leone as a country emerging from the ebolaepidemic, was to see that maternal and child health is improved and therefore a key deliverable was to improve emergency medical services.

The Bonthe District Medical Officer, Dr. Ibrahim Kargbo-Labour referred to the commissioning of the ambulance boat as a “dream come true” as he said the people ofBonthe were dying because of late referrals.

Alpha Jalloh, Deputy Director of the Local Government Finance Department (MoFED) emphasized that the ambulance boat service should be supported and not suppressed by the two Bonthe councils as general financing of health services for the Bonthe District is channeled through these Local councils, and therefore the DHMT will need the support of the two councils.

The handing over ceremony in Bonthe attracted government officials,  representatives of the World Health Organisation (WHO) , and other stakeholders and citizens of Bonthe District who  later gathered at the Mattru Jong  harbor to witness the landing of the Bonthe Ambulance boat; an epic and historic event in the medical landscape of Sierra Leone and particularly in the lives of the people of Bonthe District who for far too long, had suffered  in accessing proper medical facilities due to lack of sea transportation facilities especially with people living in the island and difficult hard to reach riverine areas.