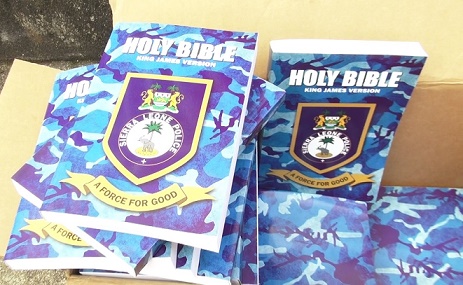 “We all hope and want to build a police force that will uphold the principles of morality and integrity to enhance a better security for the lives and property of Sierra Leone”, he said, adding that the bible must always serve as a guide and light to force members and personnel in the execution of their duties whose role in society was crucial role in society.

Since 1973, the organisation had printed over 136 million scriptures and scripture portions and distributed them to churches and missionaries all around the world.

Taylor said they had decided to target the police force because it was doing the work of God by protecting lives and property and that they should not do without God’s word. He said the scriptures would further complement their efforts, claiming that they were doing extremely good job in society.

“Doing the work of God requires that you have a book that teaches the principles of being a humanitarian person,” he said.

While receiving the donation deputy inspector general of police, Richard Moigbe, said a bible was the greatest gift to have been provided for them and that the force was very much pleased to accept it. He said the role of the police in society was very important in sustaining peace and that they would really need the guide of the bible.

“We have time to worship and the police are peacemakers. It is in the bible that blessed are the peacemakers for they are the children of God. As a peacemaker we are the first point of response to human rights abuse in the country,” Moigbe stated.

He reiterated that they had received the light and that they would ensure that the bible guided them at all times in executing their duties for the purpose of peace in the country.

Some of the other police personnel, who received the Holy Bible, said they were happy and felt touched by the donation. They promised to read the book on a daily basis in order to inculcate the concept of morality and integrity in the discharge of their duty.

Some members of the public told AYV I a random sampling of views about the donation that the gesture was very much timely, noting that that might help change the attitude of the police.

“The police need God. They have always been accused of corrupt practices. They should always have their bible and use it as their guide which will help change the force for the good. We hope after all this they will start to carry out their duty in a responsible manner and in the interest of protecting the public,” one of the respondents said.