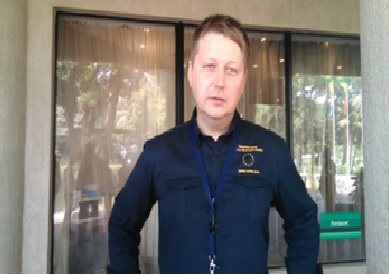 He went on to say a total of one hundred (100) EU Observers drawn from various member states of the EU would finally be deployed across Sierra Leone to observe and report on the conduct of the March 7, 2018 general elections, adding that the EU Observer team would be working alongside local elections observers.

According to him, the EU Observer Mission would not only be looking at the pre-election arrangements; they would also be looking at the conduct of the National Electoral Commission (NEC) and other bodies to ensure that the outcome of the March 7, 2018 elections is not only fair but also credible.

In response to questions from members of the press on whether the Mission is capable of covering the whole country and be present at all polling stations across the country, Deputy Chief Observer, Marek Mcracka stated that they would be working alongside local staff and that with their support the Mission can cover and observe the entire elections.

Other members of the Mission that have arrived in the country include Peggy Corlin (Press Officer), Mukaly Deuze, Michela Sechi among others.

According to EU Observer Mission Press Officer, Peggy Corlin, twenty-eight (28) Observers left yesterday to deploy in the sixteen districts. She added that before Election Day, there would be one hundred EU Election Observers on the ground.