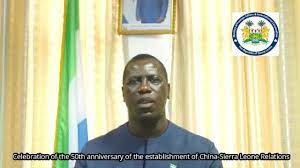 The Ministry of Foreign Affairs and International Corporation (MFAIC) has handed over medical equipment that were secured from Kuwait for the health sector to the Ministry of Health and Sanitation.

The handing over ceremony took place at the conference hall of the Ministry of Foreign Affairs and International Corporation (MFAIC), on Tower Hill in Freetown.

The items were donated by the Dr. Khalil Al-Sabti, who happens to be the Managing Director of the Kuwait Specialized Eye Centre. The items were secured by the Sierra Leonean Ambassador to Kuwait, Her Excellency HajaIshata Thomas.

Acting Minister of Foreign Affairs and International Corporation (MFAIC), MamadiGobeh Kamara, acknowledged the effort made by the Sierra Leonean Ambassador to Kuwait whom she said is representing the country very well.

She continued that during the 13 years of bilateral relationship, the two countries have signed a number of bilateral agreements for the furtherance of trade, economic and Technical Corporation, technical education, as well as professional trainings.

She expressed firm appreciation to the government of Kuwait for their Kuwaiti Fund as well as the Islamic Arab financial institutions, such as the BADEA for their valuable support to the country’s national development priority programs, especially in the area of water and sanitation, healthcare delivery and infrastructural development.

Deputy Minister of Health and Sanitation 1, Dr. Anthony Augustine Sandy, described the handing over ceremony as a happy moment for the health sector. He expressed his appreciation to the Kuwait government for what he also described as a humanitarian service to the country.

He revealed that some Sierra Leoneans have, in recent times, left the country for eye surgery overseas. He added that the medical equipment will begin to change the trajectory in the health sector.

He vouched, on behalf of government and the Ministry of Health and Sanitation that they will make the best use of the equipment, adding that his ministry will distribute them across hospitals in the country.