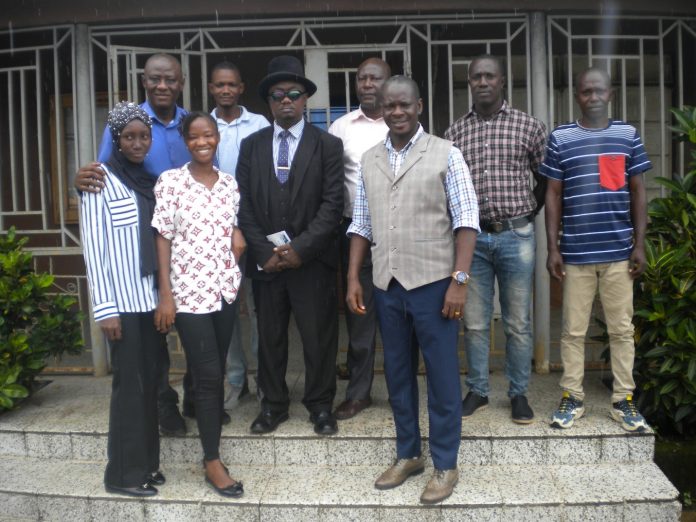 The Public Education and Outreach Unit of the Anti-Corruption Commission’s Northeast Office, encouraged staff of the Right to Access Information Commission (RAIC) to hold fast to their mandate and spurn corruption.

This urge was conveyed to the RAIC staff in a customized meeting which, among other strategies, is an ACC prevention approach employed to engage public officers on the insidious effects of corruption and the need for a collective effort to combat the threat.

Making the keynote anti-graft message at the engagement, which was held at RAIC’s office on Mabanta Road in Makeni, Senior Public Education Officer, Abdul Karim Bangura, highlighted  ACC’s staunch stance on fighting all forms of corruption. He added that the ACC is always ready to partner with as many institutions as possible to promote transparency and accountability within the public sector. This effort, he stressed, is a strategy in the ACC’s National Anti-Corruption Strategy Action Plan (2019-2023).

The senior officer also stated that the ACC expects all public sector actors to properly utilize public resources and take responsibility for their actions, not least in the context of fighting against corruption. Thus, he implored the RAIC workers to ensure that their conduct at work invariably bears them out as credible public officers. ‘The way to get it right and abstain from corruption is to strive to uphold integrity at all times,’ Bangura averred.

In his contribution, ACC Resident Prosecutor, Timothy P. M. Sowa, drew the attention of the RAIC staff to the law against corruption. The Prosecutor revealed that milestone reforms have been promulgated to punish persons who have been found guilty of corruption. Referring to the 2019 Amended Anti-Corruption Act, the lawyer disclosed that besides a minimum fine of 50,000 New Leones and/or a minimum prison term of 5 years, the law provides, among other things, for prosecution in absentia and powers vested in the ACC Commissioner to rescind any contracts he considers not being in the interest of the citizens.

He further disclosed that the Amended Act criminalizes examination malpractice, and that on the 13th July, 2022 the High Court of Makeni convicted Foday Sulaiman Bangura on one count of engaging in Academic Malpractice, contrary to Section 128 (3) of the Act aforementioned.

The convict was sentenced to pay a fine of 50,000 Leones or serve a five-year imprisonment term. The legal practitioner concluded that laws against corruption would be applied without fear or favor in pursuit of justice for the public. ‘I encourage all at RAIC to refrain from corruption always’, he concluded.

Furthermore, the RAIC staff were updated on the recent recovery of over 180,904, 803 in the old Leones from the Freetown City Council. ACC Public Education Officer, Aiah Sourie, explained that the cash which was captured in the 2019 Auditor General’s Report was paid to the Head of the Mayor’s Delivery Unit in contravention of the provisions of the Local Government Act of 2004. Officer Sourie confirmed that the non-conviction-based asset recovery mechanism has proven an effective way of getting misappropriated public funds paid back without any major difficulty.

In his response, Abu Bakarr Kargbo, RAIC’s Commissioner in the region, thanked the ACC for the engagement, saying that he would want the two Commissions to work closely in the advancement of transparency and accountability in Ministries, Departments and Agencies. The Commissioner added that some heads of public institutions in the region would always take umbrage at his executing the mandate of the RAIC. ‘I hope that this behavior will change, whilst collaborating with the ACC,’ he said with hope.

The RAIC came into being by an Act of Parliament in October 2013, as a result of ten years of strong advocacy campaign by a coalition of Civil Society Organizations in the country and abroad. And Government’s decision is consistent with Article 9 of the African Charter which provides for the right to seek, receive, and impact information and ideas through media sources. RAIC is therefore mandated to enforce the release of information held by public authorities.

The meeting ended with a question-and-answer session.