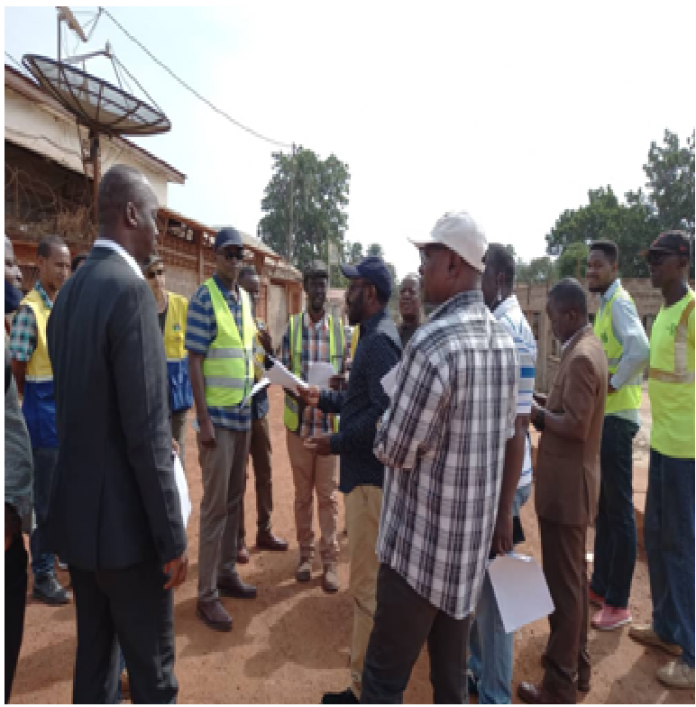 Contractors working on major road projects in the Western Area have assured the Minister of Works and Public Assets, Mr. Peter BayukuKonteh, that they would complete the remaining road works in December 2021.

These commitments were made when a joint monitoring team, comprising the Ministry of Works and Public Assets, and the Sierra Leone Roads Authority (SLRA) visited road construction sites in the Western Area to, among other things, know the progress made on the projects, verify the quality of works and ensure that works are being done within the agreed specifications and timeframe.

The joint monitoring team started the site visits in Waterloo and ended at Tokeh. In Waterloo, the Chief Executive Officer of the Gento Group of Companies, Mr. Mohamed Gento Kamara, told the team that his company had accomplished 50 percent of the work, given that they had almost completed drainage works and the installation of slabs.  They were to engage in final earth works and later spread Asphaltic Concrete Wearing Course.  He assured the team that they were working hard to complete the project before the end of July 2021.

However, Mr. Kamara told the delegation that the relocation of utility services like electricity poles and a legal controversy over the ownership of a borrow pit, where they have been excavating sub-base material, were among the challenges that were delaying their operations.

The Project Manager for SECON, Mr. Sahr Dugba, on his part, said they had completed 40 percent of the job. He explained that they had done substantial drainage excavation, concrete lining of the drains, completed the sub-base and were about to embark on base course, which will require crushed rocks.

However, he stated that they had a serious problem with quarry owners. He committed that they would be able to transport enough crushed rocks and speed up the work against June 2021 and as soon as the quarry dispute is settled.

The Project Manager for CSE, Ing. Mohamed Sow, told the monitoring team that works at the Hillside Bypass and Tokeh-Lumley Road projects were at advanced stages. He noted that they had some problems in trying to relocate the utility services and property affected persons but assured that works would be completed in December 2021.

Managers of other sites visited expressed similar concerns, but assured the monitoring team that works will be completed before the end of December 2021.

While explaining his end of monitoring assessment, the Director General of the Sierra Leone Roads Authority, Ing. Amara Jambai Kanneh, stated that they were looking at the actual implementation of the projects, construction works and time management.

Ing.Kanneh confirmed that all of the contractors followed the basic procedures of the construction methods. “With regards to the physical works, we are satisfied with the quality so far because all the laboratory tests were done and conformed to the specifications set in the contracts.”

He encouraged the public to be patient as government was committed to completing all road projects that it inherited and the new projects that it has initiated. He noted that that could only be done quickly if members of the public were accommodating and responsive to the request of the contractors.

The Minister of Works and Public Assets, Mr. Peter BayukuKonteh, stressed that government cared so much about quality, value for money and timely implementation of projects. “It is very fulfilling to see that the contractors are within schedule because it is the expectation of government to see that they meet the deadline. It is our wish that all the projects should be completed on the agreed end dates,” he stated.

He acknowledged the concerns raised by the contractors and assured them of government’s support to enable them overcome the challenges on access to quarries, borrow pits and reclaiming the Right-of-Way.