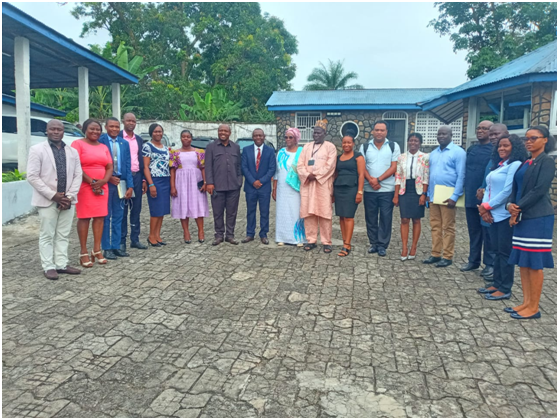 The National Early Warning and Response Mechanism Coordinating Centre Sierra Leone has informed the ECOWAS Parliamentary Oversight Mission that the Centre continuously provided early warnings to government before the occurrence of the August 10Protest.

In a meeting with the ECOWAS Parliament delegation to Sierra Leone on Thursday 27th October 2022, Hon. Adja Satu Camara Pinto who is the 4th deputy speaker asked if the Centre gave early warnings before the August 10 Protest. Responding to the question, the Acting Director of National Early Warning and Response Mechanism Coordinating Centre Lt. Col. Musa F. Kanneh said they continuously gave warnings especially on the need to reduce the prices on food commodities to prevent any protest. Hon. Pinto ended up advising the Government of Sierra Leone to ensure youth involvement in leading the processes of Education, Agriculture, Security and the environment because they will be strong security apparatus that will help build the country “everyone should be involved including government, citizens and civil society organisations,” she ended.

The oversight mission by the ECOWAS Parliament according to the head of delegation Hon. Kebba K Barrow is to find out the level of preparedness of the Centre and what they have been doing.  “This is part of our annual activities to discuss conflict prevention mechanism and human security drive in the sub region,” he said. Expressing his impression, Hon. Barrow said Sierra Leone is doing well especially with the setup of such a Centre while encouraging  government give adequate and timely funding to the Centre to enable then carryout their planned activities,  coordinate and expand their partnership with other agencies.

The Acting Director of the Centre Lt. Col. Musa F Kanneh in his opening remark stated that the establishment of the Centre is an initiative of the ECOWAS Commission as part of it conflict prevention mechanism and human security drive in the sub region. He added that the Centre works in collaboration with state institutions and NGOs to gather, analyse and disseminate information to relevant stakeholders and institutions for their responses and provide early warning to government and the ECOWAS commission which will trigger early response against threats to human security.

The Centre was launched on the 13th September 2021 by the government of Sierra Leone in fulfillment of it obligation in national and regional security.