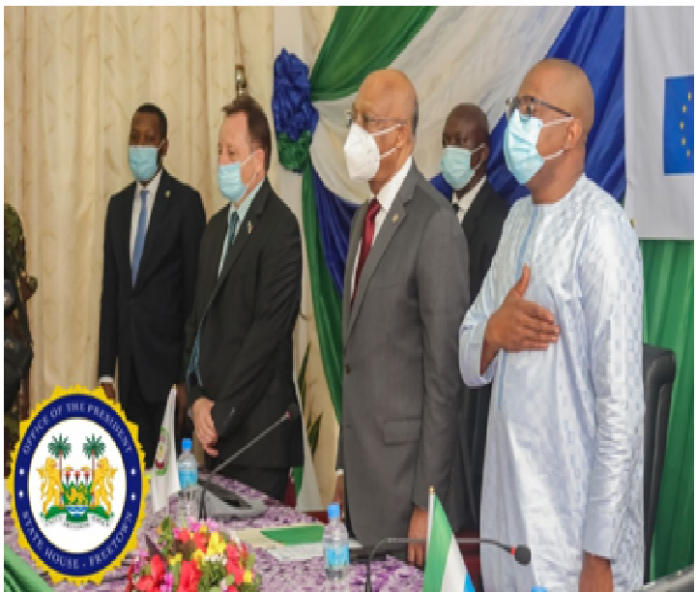 Vice President Dr Mohamed Juldeh Jalloh has launched the National Early Warning and Response Mechanism Coordinating Center, an initiative intended to be a community instrument for solidarity, essential for the prevention, management and resolution of conflicts besetting West Africa.

He assured the Economic Community of West African States, ECOWAS, of the country’s ability to handle the center, especially for its intended purposes, adding that the infrastructure already was equipped enough to be able to help it work efficiently.

The 15-member regional group, in January 2020, announced the move for the establishment of a national centre for the coordination of early warning and response center in Sierra Leone as a proactive measure to address regional challenges in responding to such problems as climate change, security and health issues.

Addressing the meeting, the President of the Commission of ECOWAS, Jean-Claude KassiBrou, said they had decided to establish the center in all member states and that he was pleased to be in the country for the same launch.

He went on to reiterate that the center was to manage crisis, manage information prior to crisis and to prevent crisis from happening. He noted that the establishment of the center would help the country to have stability in terms of peace and security.

He also disclosed that the ECOWAS Commission had taken up the responsibility to fund the center for the first year of its establishment.

Minister of Planning and Economic Development, Dr Francis Kai Kai, and in charge of the center, said he was pleased that Sierra Leone had joined other member states in the coordination and management of health and security crises.

“I want to commend the astute leadership of President Julius Maada Bio for giving his full support in ensuring the center is established,” he noted, adding that he was also appreciative of all key stakeholders and donor partners for their tremendous support to the process.

Head of European Union delegation in Sierra Leone, Ambassador European, Manuel Mueller, said the establishment of the center was laudable and would contribute to promoting the development of the country.