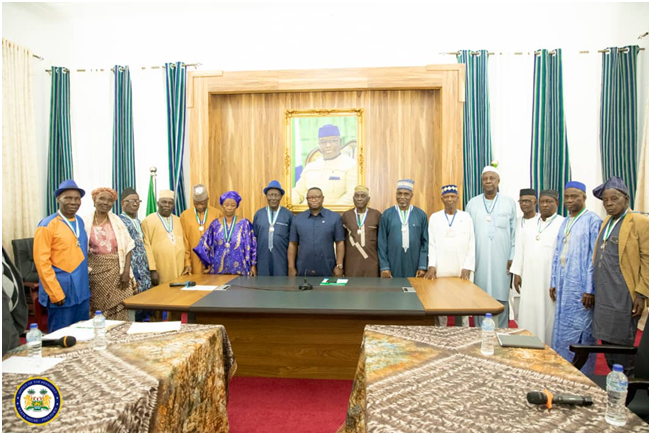 A large number of Tribal Heads in the Western Area have totally condemned the violent acts of August 10, 2022, urged government to launch an investigation into the matter and bring all those involved to face the law.

The Tribal Heads were speaking to President Julius Maada Bio in a meeting at State House in Freetown, where Chief S.O Gbekie on behalf of the Tribal Heads, thanked the president for the invite, adding that one of their roles was to help the police to maintain law and order in their various localities.

The president’s meeting with the Tribal Heads in the Western Area was to discuss their role in government’s efforts at consolidating peace and democracy and seeking justice following the August 10 violence that claimed innocent lives.

Chief Minister, Jacob Jusu Saffa, who called the meeting to order said their local authorities had been invited as one of the many such sector-specific meetings scheduled with different stakeholders to engage and discuss a wide range of development issues, though that was now happening just after the recent insurrection.

He said his boss was a listening President, who had always been willing to listen to and talk with his people on issues of development, noting that he had, therefore, always travelled across the country to engage his people on a regular basis.

In his statement, President Julius Maada Bio said he was pleased to meet the Tribal Heads at State House to engage them on various issues, especially that of the unfortunate happening of 10 August 2022.

He described the insurrection as an unfortunate event, in which a group of people had organised young people to cause mayhem in some parts of the country and in the Western Area.

He added that notwithstanding the difficulties around the world, his government had been making great efforts to cushion the pressure on citizens, noting that he was also working on a long-lasting solution as evident in the implementation of the Human Capital Development.

“In the last four years, my government has succeeded in cleaning the image of this country. That is why we are being invited severally to chair and co-chair many meetings of development that will benefit the country,” he said.

The president also said that his government had changed and reviewed so many laws to ensure that society was safe, progressive and freer for all citizens irrespective of where they were. He, however, assured that his government would investigate all those who were involved in the August 10 insurrection.

He thanked them for coming and for educating their people while encouraging them to continue doing their good work as leaders.