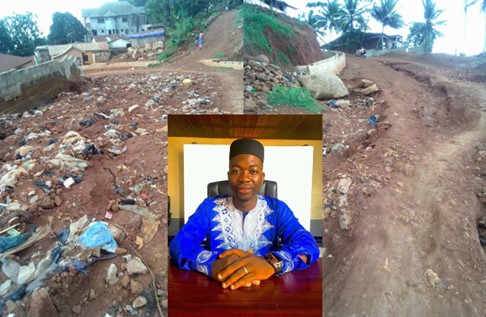 Two hilltop communities, Tree Planting, Leicester Road and their environs are currently sitting on what many people have described as ‘a time bomb’ ready to explode and take many lives should government fails to make an urgent intervention to save its people.

Following an unexplained stop on the Tree Planting, Leicester Road Community Road Project few months ago, residents have been experiencing heavy flooding when it rains.

As a result of several abandoned unfinished drainages within the community by the abandoned project, whenever it rains heavily, all the water and wastes from the hills empty into private residences.

The Tree Planting, Leicester Road Project is one of the several road projects undertaken by the President Julius Maada Bio’s leadership. It started in February 2021 and was supposed to have been completed in February this year. Unfortunately, the project was halted and abandoned due to delay in supply of Finances to the construction company from the Ministry of Finance.

The uncompleted and abandoned project, Councillor Zachariah Kanneh of Ward 395 said, has been causing numerous destructions to residents within the community, leaving several properties destroyed.

He said disappointingly, all the wastes and water running down from the hilltop whenever its rains heavily, go directly into his people’s houses.

According to Councillor Kanneh, the excavated waste coming into residents’ houses when it rains, pose big threats to them, their properties and families.

He said whenever it rains, he receives dozens of calls from residents complaining serious flooding in their houses, which according to him, is as a result of the uncompleted drainages.

He urged the government to speed funding to the projects and save residents the looming dangers this raining season pose to bring on his people, while also calling on government through the Ministry of Finance to release funds to the road constructors for the project to be concluded before floods and more destruction start occurring.