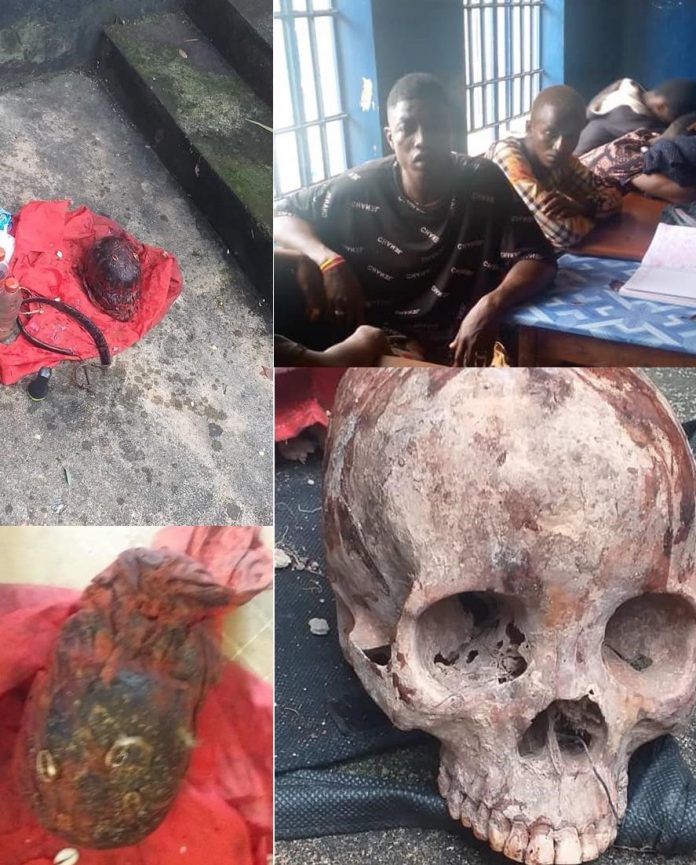 At Ismaia road in Kabala town, at 5:00am yesterday 21st September, 2022, police personnel from the Criminal Investigation Department (CID) carried out raids on suspected criminals within the township.

The raid came after a business man reported that between 3-4am yesterday, his shop located at his residence was broken into and goods worth millions of leones were carted away.

According to the Information Officer at the Kabala Police Division, Patrick J.F. Conteh his personnel responded, conducted raids and arrested 3 suspects Sulaiman Jakitay of Badembaya, Ibrahim Jalloh of Badembaya and Sheku Massaquoi of Forest Road all in Kabala township.

He said during the raids, the police discovered some of the stolen items from the residence of the main suspect Barrie (who is still on the run) at Badembaya.

He said the most shocking thing that was discovered during the search, was a human skull with charms wrapped around.

Officer Conteh narrated that the scene attracted much crowd as the news of a discovered human skull spreads.

He said the shocking discovery was taken to the head of the Koinadugu/Falaba Districts Traditional Healers Association, Mohamed S. Marah who explained to police that thieves usually use human skulls and other charms to break into the premises of their victims by placing such skulls at the entrance.

The police said Mr. Marah went on to say when such is done, victims normally goes into deep sleep until after the thieves are done with their activities at the premise.

All exhibits and suspects arrested are now in police custody together.