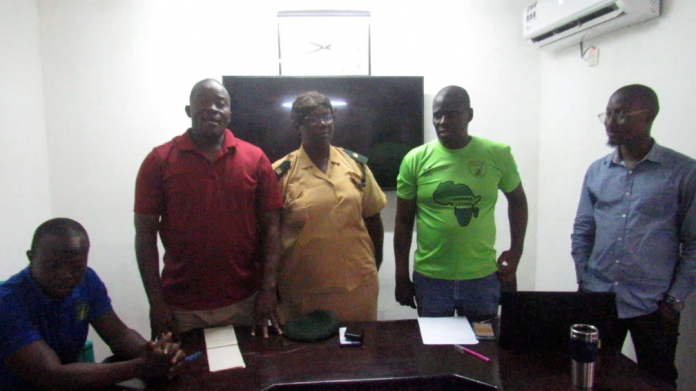 Ahead of T20 World Cup Qualifier schedule for late November this year in Rwanda. Sierra Leone Cricket Association has appointed Kenneth Masinga as head coach for the Sierra Leone Senior Men Cricket Team known as Patriots.  The Chairman Board of Directors Sierra Leone Cricket Association Francis Trevor Samura said Kenneth Masinga has vast experience in Cricket coaching and that his job in coaching is to supervise and trained grace root coaches.

The South Africa Born have been part of the Sierra Leone Cricket team since 2016. Kenneth Masinga has served as senior women’s coach and school/youth administration in January 2014 at Benoni Area in South Africa, he also served as schools coaches’ coordinator in August 2001 in South Africa. In Sierra Leone among all the cricket coaches Kenneth Masinga is the only coach to win gold medal at the senior ICC level. Upon his appointment as the head coach Masinga will also serve as a supervisor in the U19 female cricket and among other areas.

The Chairman Board of Directors Sierra Leone Cricket Association Francis Trevor Samura said the roles and responsibilities of Kenneth Masinga is that he will add his experience he had over the previous years as a coach and he is here to improve coaching skills of our grass root coaches.

“Kenneth Masinga will be training the coaches conducting series of practical and theory session for both coaches and players and he will also be helping the Sierra Leone Cricket Association in developing schools programs as this is one of his profession in South Africa.

“He will also conduct a correctional service for three women national cricketers at the under 19 level who were deported by the International Cricket Council for illegal boning action in the recently concluded ICC women under 19 cricket Africa Division one qualifier in Botswana.”

Trevor Samura said they have put in place the little resources they have as a way to prepare the Senior Men’s Cricket Squad for the T20 Cricket World Cup qualifier, the coming of the new coach is also part of their preparation and that they have conducted Franchise cricket league, Elite cricket league, Men’s T20 cricket premier league and national trials.

“We are struggling financially as we are looking forward for government supports, cooperate entity, individuals and any other source.

Kenneth Masinga head coach Sierra Leone Senior Men’s Cricket Team said appointing him as head coach is a big task for him as the first time he met with the Sierra Leone Under 19 Cricket Team in Zimbabwe he could not understand what is wrong with team as they were unable to catch the ball, but upon his arrival in Sierra Leone he found out the field they played is full with stones.

“Now it came to his mind that this is a huge tasked because the resources he has use to, is a high standard resources in South Africa starting from the clubs level to the national level therefore this is really a heavy task. The reason why he is here is a mandate, which is change and development are the two things and the mandate is to take Sierra Leone cricket into another level.”

“Government Sports Association support to the team is key factor as Sierra Leone lack the necessary facilities in Cricket. His vision and mission is to provide a place for innovating training and learning new skills particularly on the junior level. He is not going to change the team’s ways or style of playing but to be innovative interns of the flay and that despite the poor resources the team still performs, shows that there are talents in the country that needs to be nurtured.”

Masinga said his other mission is to provide development for every stake holder to be Unique, and also to develop coaches’ skills on and off the field. He will teach players to be time conscious and well discipline as he is not here for politics but for cricket coaching.