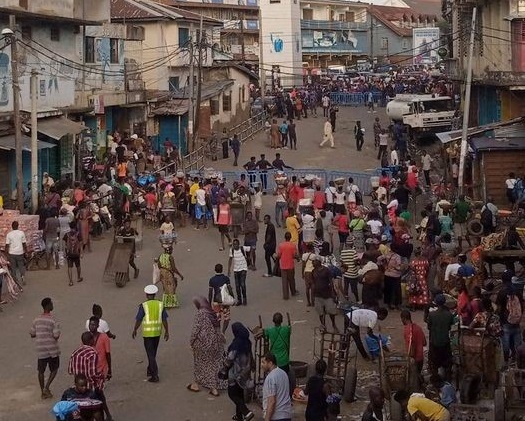 A white Fuel Tanker fully loaded with petrol, in the evening of Wednesday 16th November, 2022 lost control and crashed at a shop on Sani Abacha Street in Freetown. There was no loss of lives and/or properties reported.

However, the level of alertness displayed by security forces led by the Sierra Leone Police was admirable by onlookers and passers-by.

Reports say within minutes after the crash, the security forces rushed to the scene and barricaded the street so as to protect the tanker and prevent passers-by, residents and traders from rushing to fetch fuel from the crashed tanker.

Disappointingly, there was a display of carelessness on the part of residents, traders and passers-by who has wanted access to go fetch fuel from the tanker if not for the alertness of the security forces.

This according to many people, goes a long way to tell how careless and selfish most people still continue to be, despite the sad historic fire disaster that claimed hundreds of live and properties with billions of leones at PMB in Wellington a little over a year ago.

The scene at Abacha Street would have been related to the PMB Wellington fire disaster if not for the swift intervention of the smart security forces to barricade the scene.

It can be recalled that the 15-man Presidential Taskforce that was set up to investigate the causes of the Wellington petrol tanker fire disaster which took place on 5th November 2021, claiming the lives of over 150 people and leaving dozens seriously injured, found out that the behaviour of the public, following the collision, was a major contributing factor to the scale of the incident and a serious cause for concern.

At the outset, the Report states, despite the tanker driver using a megaphone borrowed from a nearby seller to advise the public to avoid the scene, he was reportedly insulted and his advice completely ignored,” he said.

The report says there was poor communication between the security services and the Petroleum Regulatory Agency, responsible for regulating oil marketing companies, and emphasised the need to enhance effective communication among all players in the SLIMS.

Receiving the Report, President Dr. Julius Maada Bio assured his government was going to take a closer look at the findings and recommendations to come up with policy and measures that could prevent such disasters from happening in the future.