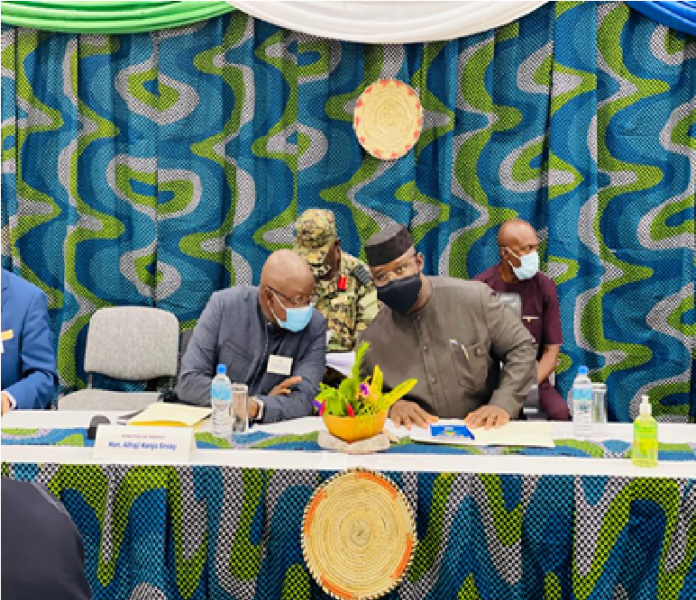 President Julius Maada Bio has reiterated the commitment of his government to reforming the energy sector. He made this commitment at the first day of a two-day Energy Sector Round Table Conference held in Freetown where he commended international partners and private sector support to the and catalogued a variety of energy projects and policies that his government had undertaken or was undertaking in the country.

Delivering his keynote address, President Bio commended international donor partners for their collaboration with sectors and entities in the energy sector. He said he was pleased to join participants at the conference because the conference was an opportunity for him to reiterate to partners his commitment to reforming the energy sector, noting that the overarching intent of the meeting aligned with his government’s policy direction in the sector.

“As a government, we set a number of priorities three years ago. First, to reform the energy sector; second, to ensure the financial sustainability of the sector and third, to enhance significant increase in and equitable access to affordable and clean energy,” President Bio said, adding that his government identified these priorities for the energy sector because it believed that reliable, affordable, accessible and clean energy was critical to national development with specific reference to the government’s human capital drive.

President Bio spoke about policy reforms in the energy sector and the implementation of standard operating procedures and also catalogued a number of energy projects in the country, including but not limited to the World Bank funded Energy Sector Utility Reform Project in the Western Area, the ongoing Bo-Kenema Network Rehabilitation and Expansion, the FCDO’s funded rural renewable energy and mini grid installations, the West Africa CLSG Power Pool, and the electrification project of the seven district headquarter towns of Kambia, Kabala, Moyamba, Kailahun, Mattru, Bonthe and Pujehun.

President Bio stated that despite the challenges occasioned by the novel Covid-19 pandemic, the need to provide affordable and accessible electricity has not diminished.

He said his government has had to support the deficit in the sector in excess of one hundred and forty billion leones in just the 2020 financial year. He called on actors and partners in the sector to coordinate efforts.

He highlighted the purpose and specific objectives of the meeting.

Alhaji Kanja Sesay spoke about the rise in demand for energy with specific reference to the Western Area and catalogued energy sector reform projects across the country, which he said represented transitions in the sector, while also maintaining that they were optimistic the promising outlook would be good.

Mr Saffa said the emphasis of the Ministry of Finance over the last three years had been to work with the Ministry of Energy to develop appropriate strategies to support the cash flow challenges of the sector, adding that the sector continues to suffer from commercial and technical losses.

He highlighted the long-term subsidies the energy sector had enjoyed, the import and GST waivers granted, adding that the government remained the largest partner in the sector.

The World Bank Country Director for Sierra Leone, Liberia and Ghana, Pierre-Laporte, the MCC Country Manager, Matt Langhenry and the DFID Country Manager, Kobi Bentley, commended the government for its strides in the energy sector and reiterated their commitment to providing continuous support and collaboration.

The Permanent Secretary in the Ministry of Energy, Tamba Gbetuwa, welcomed participants and announced the fundamental purpose of the meeting.