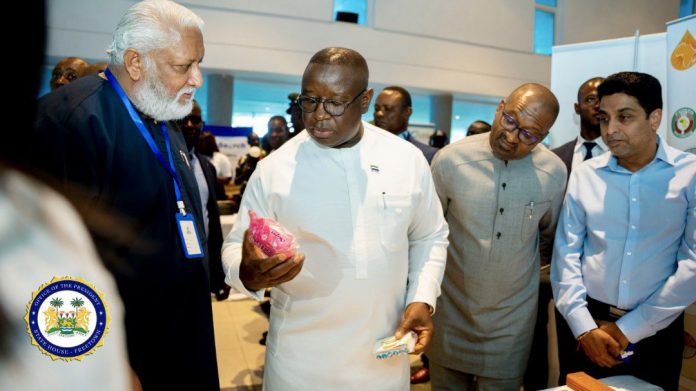 The President of Sierra Leone, His Excellency Dr. Julius Maada Bio was highly impressed at the major strides made by local companies like Pee Cee and Sons, and Jolaks Manufacturing Company, which are contributing to the economic development of Sierra Leone. The President who was taken on a conducted tour of exhibited local products of Pee Cee and Sons and Jolaks Company at the National Youth Employment and Entrepreneurship Fair (NYEEF), commended the Chief Executive Officer and Proprietor of the two companies, Mahesh Nandwani for taking the lead in private sector development and being a champion for the country’s local content policy implementation.

On Tuesday 15th November 2022, the Government of Sierra Leone, through the Office of the Vice President, hosted over 500 promising young Sierra Leoneans, aged 18-35 years, from across the country during the country’s first National Youth Employment and Entrepreneurship Fair (NYEEF).

The Pee Cee and Sons Boss who was representing the manufacturing, food production and distribution sector in the country at the event has his company as one of the partners that organized the job fair. He was thankful to His Excellency, the President Julius Maada Bio and the Government for availing them the opportunity to be part of such an important programme.

Nandwani stated that the sector is an important job creation entity and that they are pleased to be part of the event, which brings together young people that are seeking employment opportunities.

“This National Youth Employment and Entrepreneur Fair allows us to direct them and more importantly explain to them the various competent and skills that we need to boost the manufacturing and agricultural business sector,” he said and added that with over forty years’ experience in the sector, the food production sector holds the key in job creation in the country.

The food production and supply chain, he said, creates numerous opportunities for young people, from low schemes, processing and marketing, adding that the potentials are enormous.

“Since 2018, many industries have been established in the sector, including Jolaks Manufacturing Company Limited, which consists of palm refinery and a sophisticated manufacturing plant, which after fulfilling local demands, we are now exporting vegetable cooking oil and soap to Senegal, Mali, Guinea Bissau, Nigeria, Ghana, Liberia and Guinea,” the CEO said and furthered that these developments have led to establishment of new partnerships with successful companies in West African Countries like Sunuku Group in Guinea that graced the event at the Bintumani Conference Hall.

“We are also welcoming them to Sierra Leone as partners to create employment opportunities and skills transfer for young people,” he said and went on to thank the government for the enormous strides taken to make the sector competitive, such as the expansion of energy access, which has enabled them to reduce overall cost. “Such kinds of support will continue to serve at the center of expanding production and create more jobs. The government can count on us and we want to appeal that the event becomes an annual event and continue to engage with the government on job creation,” the Pee Cee and Sons Boss said.