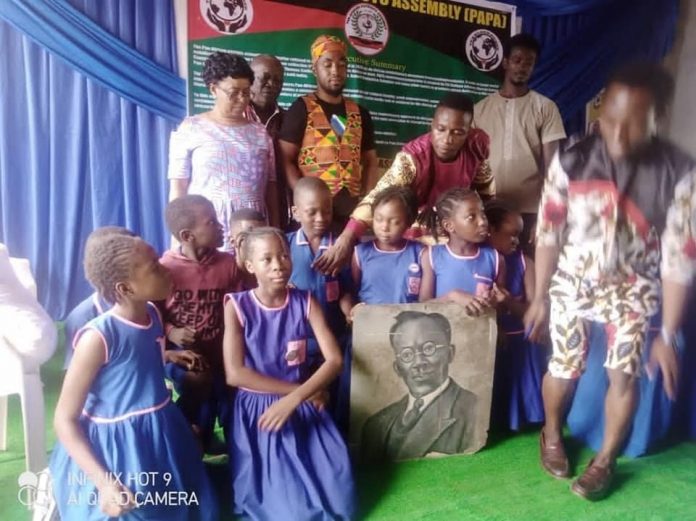 The event took place at the I.T.A Wallace Johnson Memorial School situated at Wilberforce in Freetown.

Africa Day is the annual commemoration of the foundation of the Organisation of African Unity on the 25 May 1963. It is celebrated in various countries on the African continent, as well as around the world.

The organization was transformed into the African Union on the 9th July 2002 in Durban, South Africa, but its celebration continues to be celebrated on the 25th May.

In her welcome address, the Head Teacher of the aforementioned school expressed her appreciation to the organization for selecting her school to host the celebration of their past heroes and heroines of Africa.

The Head Teacher further explained the history of the school, which according to her started in 30th October 1963 by the Late Rev Prince Solomon Coker, with only 6 pupils by then.

She maintained that the school acquired its name from the late I.T.A Wallace Johnson whom she said was a mentor to the Founder.

Speaking at the event, the General Secretary of the Pan-African Patriots Assembly, Mohamed Salami, intimated that the theme for this year is “The Enduring Legacy of I.T.A Wallace Johnson” adding that the history of the aforementioned school is very rich.

Salami stated that the Pan-African Patriots Assembly (PAPA) is a revolutionary Pan-African organisation that promotes social organisations to build the Africa they want to see emerge further disclosing that the organisation has been in existence since 2020.

He furthered that they were inspired by the late I.T.A Wallace Johnson and others asserting that the past heroes and heroines did all they could in terms of attaining total liberation for Africa maintaining that it seems as if all generations after them are not paying attention to things that are really relevant to the total liberation of Africans.

Salami expressed the wish of seeing local languages been taught in schools averring that one of the reasons why students fail in examinations is because they are not being taught in their local dialect which they could understand better.

Harriet Grace Bangura, a pupil of the school, said on behalf of her colleagues they are grateful for such an occasion being held in their school, continuing that she hope that this is not the last explaining how they learnt that they as Africans must embrace their culture.

This auspicious event was climaxed by a debate and quizz competition. The winners received different prizes from the organization.