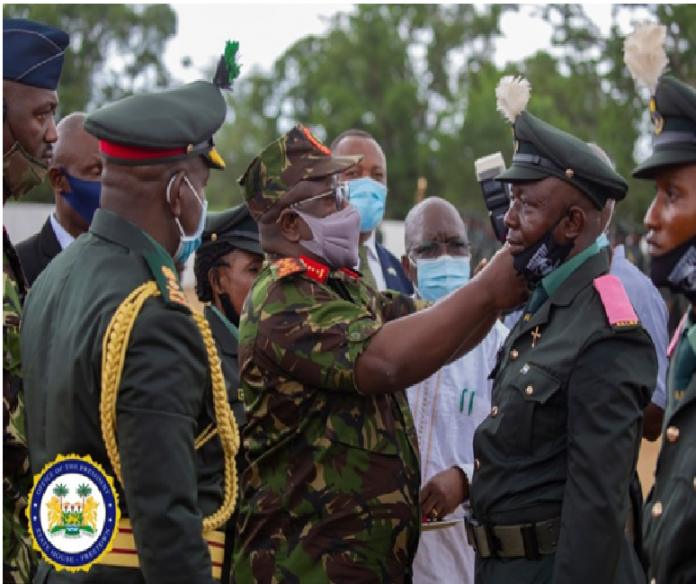 “With a proportion of sixty percent women in our last two recruitments, we have exceeded the threshold of the UN resolution – one of the very few African countries to do so.

“As a Government, we are doing our part. We have applied a 25% pay raise right across the sector. Since 2018, Sierra Leone has worked toward compliance with United Nations Resolution 1325 and recruited more women into the armed forces than at any time in our country’s history,” he said.

“We have started that irreversible process of transforming our armed forces into a modern professional force. For the first time, the recruitment process has been transparent, citizen-owned, and free of influence so that even charcoal sellers like Private TennehConteh and farmhands like Private Phillip Kamara had an equal chance to serve their nation,” he said.

As a former soldier himself President Bio recalled that he was happy that comprehensive and rigorous training modules had been instructed, advanced training and proper regimentation would follow, and then well-polished soldiers would be deployed to their units.

President Bio said in spite of budgetary constraints, the government had made good on their obligations to the country’s servicemen and women in a timely way, adding that they had also constructed 6 modern forward patrol bases to accommodate soldiers along the country’s borders.

“We have completed 48 apartments at Wilberforce being married quarters and the Boom Defence at Kingtom. An ultra-modern Myohaung Officers Mess and Single Officers’ Quarters will be commissioned by August of this year. 34 Military Hospital is being transformed with new infrastructure and equipment, 100 hospital beds, an administrative building, and a pediatric centre for excellence, thanks partly to the great work of the First Lady of the Republic of Sierra Leone.

“We will continue apace with various infrastructure initiatives with a view to providing our servicemen and women with habitable quarters and appropriate facilities.

“Let me conclude by reminding this graduating class that your primary obligation is to serve your nation with honour and courage at all times. While we are a nation at peace, we must sustain that peace, support national development, and continue building the Republic of Sierra Leone Armed Forces we want,” he said.

Earlier in his welcome statement, Col. H.S Jalloh, the Commandant of the Republic of Sierra Leone Armed Forces Training Center, said he was honoured to welcome distinguished personalities from all walks of life to Benguema, where he called the bastion of military professionalism in the country.

He further explained that the journey of those specialist officers and recruits started in December of 2020 after they spent 6 months of uninterrupted training that led to their transformation from civilians to military officers and soldiers. He added that the best pieces of training were conducted by qualified instructors in and out of the Republic of Sierra Leone Armed Forces and confirmed that the performance and character of the officers and soldiers were credible and satisfactory.