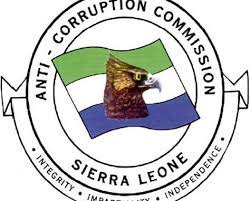 In its sustained effort to ensure that the people are aware of corruption issues in their communities, the Public Education Unit of the Anti-Corruption Commission (ACC) office in Kono held fruitful discussions with residents and stakeholders of Njala and Jaiama communities in the Nimikoro chiefdom, Kono district.

The sessions, which took place at their respective court barrays, provided an opportunity for the ACC to inform the gatherings of the operations of the commission, its achievements under the leadership of Commissioner Francis Ben Kaifala Esq and the various means of reporting corruption prevalence in the communities to the commission.

Nimikoro chiefdom is rich in gold and diamond deposits but proceeds from mining have not improved the socio-economic status of its indigenes as majority of them are below the poverty line.

Public Education Officer of the ACC Sam P. Gogra reminded the people about the existence of corruption in their communities, especially in schools, health centers, security and mining sectors, markets, local courts and in project implementation, among others.

He emphasised that the grassroots will never prosper and develop if corruption in the aforementioned areas is left unchecked.

Mr Gogra warned the participants and stakeholders against the misappropriation of community funds and revenues generated from mining and other economic activities in their communities.

He therefore encouraged them to always report every act of corruption to the commission for prompt actions.

ACC’s Senior Investigation Officer, Alpha G. Koroma, in his submission, referenced the Truth and Reconciliation Commission (TRC) report which indicated that corruption was one of the fundamental causes of the country’s decade-long civil war which subsequently led to the establishment of the ACC to fight all forms of corruption.

Mr. Koroma further took his audiences through some of the provisions of the Anti-Corruption Act 2008 as amended in 2019 and their corresponding stiff penalties.

Referencing some of the significant achievements of the Commission under the Francis Ben Kaifala leadership, Public Education Officer Hawa Deen Conteh mentioned the recovery of a monumental sum of over 30 billion leones and some physical assets through the non-conviction-based assets recovery strategy.

She also made reference to the Commission’s very high conviction rate and the several awards and laurels conferred on the Commission and Commissioner Kaifala.

She concluded by announcing the toll free lines of 515, 077-985985/986986 for reporting corruption-related offences to the Commission.

Town Chief of Njala, Sheku Mansaray, applauded the commission for such engagement, stressing that they have not only been enlightened on issues that constitute corruption but have  also been advised to resist, reject and report every instance of corruption to the Commission.