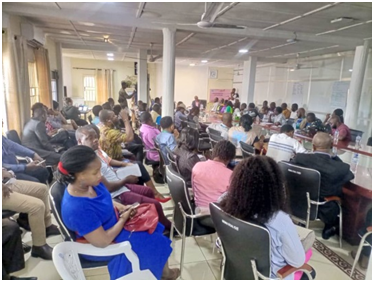 In his opening statement, NDMA’s Deputy Director General, John Vandi Rogers, who chaired the meeting said the purpose of the meeting was to update partners on the initial findings of various affected communities and identify a uniform approach to responding to the affected victims.

“Today we are here to look at the disaster incidents of the 28th and 29 August in Freetown. The reason here is that disaster management issues are multi-sectoral and multidimensional, and as such, we all must meet and map out strategies and adequately respond to this national call”, he said.

The Director General of NDMA, Lt. Gen. (Rtd) Brima B. Sesay said the Agency and partners were preparing for their Inter-Pillar meetings when the disaster incidents of August 28, 2022 suddenly struck.  As always, when such disasters occur, the NDMA will summon emergency coordination meetings to brief partners on what has happened and plan for a better response.

The meeting saw two important presentations from both the NDMA and Sierra Leone Meteorological Agency (SLMet). The NDMA presented the cause of the mudslide at Looking Town and floods in prone communities, while SLMet presented on its 2022 Seasonal Outlook.

NDMA’s Director of Research, Monitoring and Evaluation, Abu Bakarr Bangura during his presentation, explained the factors responsible for the mudslide and flooding. He pointed out: “Climate change and extreme weather conditions, poor urban planning, poor waste management, regaining of swamp lands, building on waterways and beyond demarcated zones, sand mining and poorly constructed houses and/or makeshift structures are largely responsible for the continuous floods in Freetown”.

NDMA’s Director of Risk Reduction & Preparedness, Thomas A. Lebbie highlighted his Directorate’s efforts in risk identification and hazard mapping, specifically within Freetown and what has been done to minimize the risks in prone communities.

‘’We have established District Disaster Management Committees across the country; community volunteers in thirty-three (33) prone settlements and trained them on managing their hazards. With the technical support of MetSL, we have also been sending early warning alerts to residents in prone communities on weather conditions”.

‘’We have had meetings with all our partners, especially those in charge of registration. We have divided ourselves into 12 groups to quickly capture all the 18 affected communities. The assessment report would be shared with partners immediately to determine their type and level of response”, he informed.

As of today, NDMA has documented eight (8) fatalities; six (6) at Looking Town, one (1) at Mount Aureol, and one (1) at Black Hall Road. The five (5) victims who sustained injuries are being treated at the Connaught Hospital.