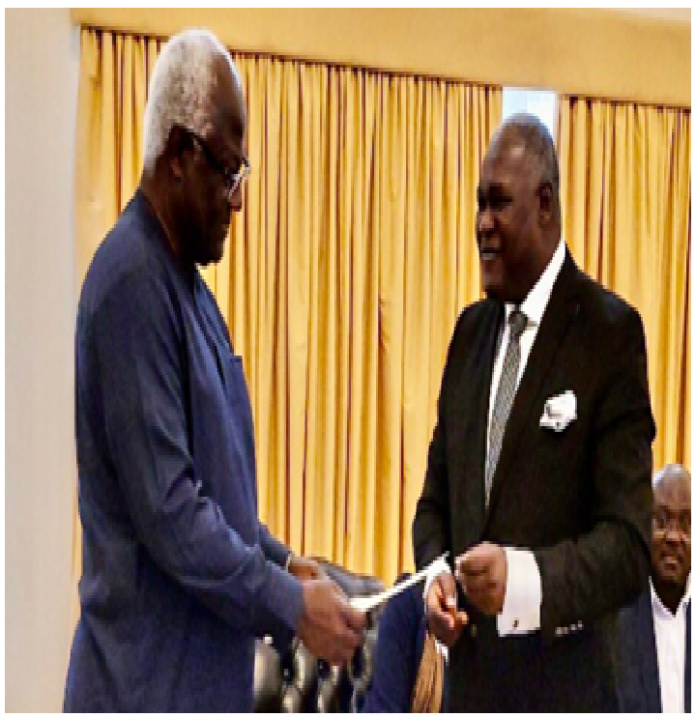 The African Bar Association (AfBA) has officially submitted a special invitation to the Former President of Sierra Leone, Dr Ernest Bai Koroma, to attend the Association’s annual conference slated to be held between 3rd and 7th October, 2021 in Niamey, Niger. In the special invitation, AfBA also notified President Koroma of its decision to honour him with the 2021 African Leadership Medal during the Annual Conference.

At a short presentation ceremony in Makeni, AfBA’s Director of Information and Protocol, Elvis Enoh said the African Bar Association was established in 1971 as an advocacy group seeking to promote good governance, constitutionality and the rule of law in Africa.

Enoh went on to state that the AfBA had passed a resolution to honour some of the deserving past leaders on continent for their services to Africa in promoting Good Governance, Democracy and the Rule of Law while in office.

“In this Direction, Enoh added, the African Bar Association will be pleased to decorate Your Excellency with the African Bar Leadership Medal at the Opening Ceremony of the Conference…”

“I accept this invitation with all humility and I am going to dedicate the award to the people of Sierra Leone who gave me the opportunity to serve, members of my administration whose support was instrumental to what we were able to accomplish, and my political party that gave me a platform…. The well acclaimed Sierra Leonean statesman also reassured AfBA that he would continue to dedicate his energy, time and other resources towards promoting peace and good governance in Africa.

President Koroma will be among six other former leaders and diplomats to be awarded in Niamey.