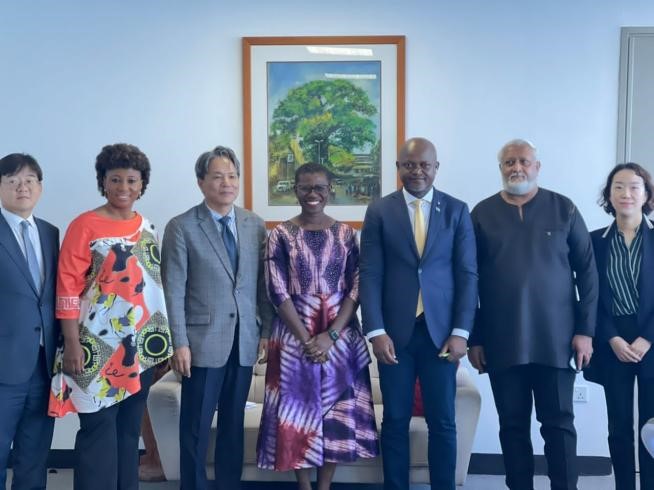 The South Korean Honorary Consul in Sierra Leone, Mahesh Nandwani, will be responsible for assisting Korean nationals in Sierra Leone and representing Korean trade interests. He is expected to create unique economic opportunities for Korean companies, open doors for the business community and facilitate visits, and maintains close ties with the local Korean community.

The introduction took place at the New City Hall building in Freetown where Ambassador Chae and his delegation were meeting with the Mayor of Freetown, Yvonne Aki-Sawyer to discuss some issues which included the New City Hall building which was funded by the government of the Republic of South Korea, the forthcoming 60th-anniversary celebrations of the diplomatic ties between South Korea and Sierra Leone among other things.

The Korean Ambassador assigned to Sierra Leone, His Excellency Kim Young Chae, remarked on Monday that even before taking office, the newly appointed honorary Consul, Mahesh Nandwani mobilised his team and even his family members to support the 60th-anniversary celebration events.

“I thank Mr. Nandwani and his family members,” he said.

“We look forward to celebrating a solid relationship in the next sixty years,” he noted and added that the new Consul has been playing a key role in driving private sector investments in Sierra Leone. “Taking up such an office will bring more opportunities in the area of trade and investments from the Korean Republic,” he said.

The celebration events, which will run until Friday 2nd December, will have colorful programs such as public policy seminars and a Korean film screening. Even though geographically apart, the two countries have built friendly relations over the last 60 years, by helping each other in times of need and working together in the international arena such as the United Nations and the African Union.

The symbol of deepening relations is the reconstruction of Freetown City Hall, and the Korean government will further deepen its development cooperation with Sierra Leone in the coming years. This is said to be another meaningful milestone in bilateral relations.

“Taking this opportunity, I would like to extend our heartfelt appreciation to those who helped tremendously our preparations for the week-long celebration events, particularly, the Sierra Leone Ministry of Foreign Affairs and International Cooperation, Freetown City Council, and Korea’s new Honorary Consul’s office. Indeed, it is our strong hope that the celebration events of this week serve as a memorable occasion to capture our 60-year history as well as to open a new chapter for upgrading our relations,” Korean officials noted.