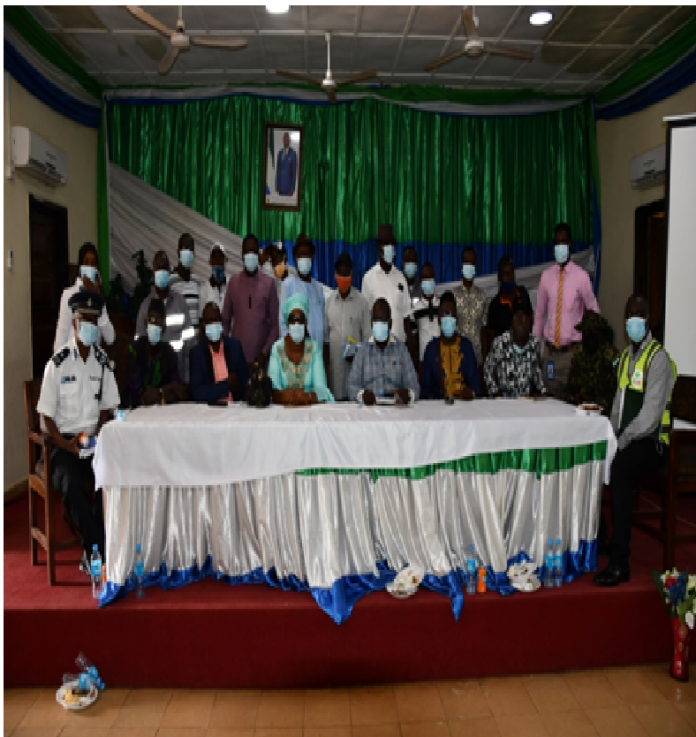 The meeting, which was organized by the Community Relations Department of the company, saw representatives from the various sectors of the district, including: MDA’s, Members of Parliament, council heads, local traditional authorities, police, military and the local media.

During the meeting, Director of Community Affairs, Kingho Investment Company, Judith Kosseh expressed appreciation for the support she enjoys from the company’s management and staff in ensuring that she is able to achieve her goals with the community. She spoke about the Community Development Action Plan (CDAP) projects which the company had been undertaking over the last month. Amongst these projects, she mentioned the rehabilitation of the health center in Pepel Town and the Women in Agriculture Project in Kamasondo Chiefdom.

Madam Kosseh also spoke about the Corporate Social Responsibility (CSR) project of the company including the Ramadan, Eid-ul-Adha and COVID 19 donations as well as the organizing of an Independence Day 2021 Football Gala in Pepel Town.

Furthermore, Madam Kosseh also spoke about the need for safety and assured that with time she will continue to strengthen the relationship between the company and the community.

Meanwhile, during his opening statement, chairman of the occasion who happens to be the Provincial Secretary, Prince Soriba spoke about the importance of collaboration between the company and the community. He said that engagement is significant to soften “skyrocketed expectations.” He added that a forum should be created through which the company discloses its work and stressed that the meeting is timely and important.

On his side, the representative from National Minerals Agency (NMA) Henry Kamara said mining is very important. He said it is essential that mining is done in accordance with the existing laws of the country.  Therefore, as an agency, they have over 270 mines monitors countrywide to ensure that mining companies comply with the legal framework of Sierra Leone.

Honourable Abdul Karim Kamara of Constituency 069 whilst dilating on behalf of Members of Parliament in Port Loko District, said it is very important for parliamentarians to be involved in future community engagements. He said MPs have responsibility to follow-up on companies that operate in their localities. Therefore, getting them involved will help them know how they can adequately advocate on behalf of the company.

Chairman Port Loko District Council, Ibrahim Santigie Bangura said mining operation is the heartbeat of economic improvement in Port Loko district. He thanked the company for all its job done so far and implored them to continue in that light.

On behalf of the security sector, AIG Mustapha Sesay of Northwestern Region said his region is the most peaceful in Sierra Leone. He gave a breakdown of the security situation in the region and assured that the police have been very supportive in ensuring the safety of credible investment in the country.

He further confirmed that they will do everything possible to collaborate with the security arm of the company in protecting all the company’s assets.

Meanwhile, the meeting ended with question and answers session.

Kingho Railway and Port Company Limited is a subsidiary company of Kingho Investment Company Limited. It administers the 192 kilometer railway which leads from the New Tonkolili Iron Ore Mines to the Port town of Pepel, in Kamasondo chiefdom, Port Loko district.

It also operates the Pepel shipping port from which Iron Ore are transported outside the country.