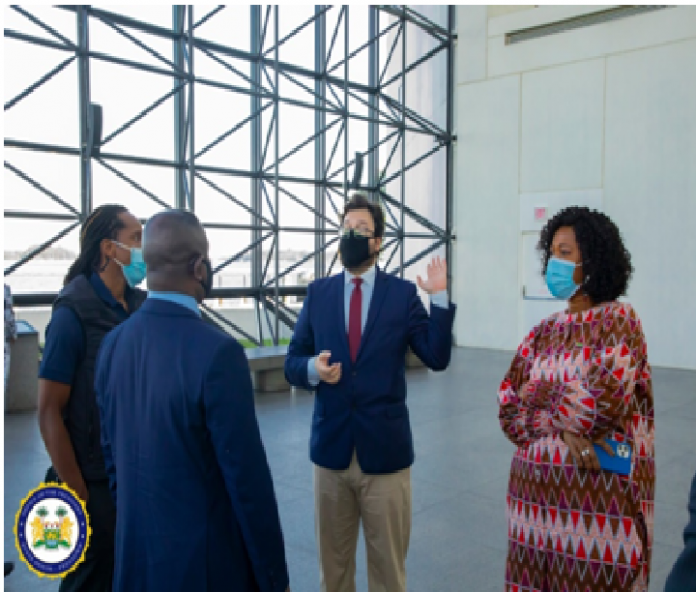 President Dr Julius Maada Bio has visited the John F. Kennedy Presidential Library and Museum in Boston, dedicated to the memory of America’s 35th President and all those, who through the art of politics, seek a new and better world.

The building holds official presidential documents and correspondences, a wealth of multimedia exhibits and artifacts and literary gems such as some unpublished writings of Ernest Hemingway, the famous American novelist, short-story writer, journalist, and sportsman.

The President with his team, among them Chief Minister Jacob Jusu Saffa, Minister of Basic and Senior Secondary Education, DrMoinina David Sengeh and First Lady Fatima Bio, was taken on a tour of the facility by Ian Shepherd, the Visitor Operations Manager, first dedicated on 20 October 1979 to educate and inform people about his legacy.

John F. Kennedy was President of the United States of America from 1961 until his assassination near the end of his third year in office on 22 November 1963. He was 43 at election and became the youngest US President.

Sierra Leone’s Ambassador Extraordinary and Plenipotentiary to the United States of America, SidiqueAbou-Bakarr Wai, commended the manager for taking them on the conducted tour and for his detailed information about the historic background of the presidential library and museum. President Julius Maada Bio expressed thanks and appreciation to the leadership of the Presidential Library and Museum