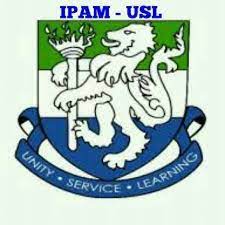 Under the energetic and innovative leadership of the Deputy Vice Chancellor of the Institute of Public Administration and Management (IPAM), Prof. Edmond Nonie, the University has for the first time in the history of Sierra Leone and in the West Africa sub-region, set up an online Students’ Union (SU) Voting System.

The SU online voting system has allowed IPAM- USL to be the first institution of higher learning in Sierra Leone to set the stage for digitised electioneering system, creating an ambiance for a peaceful exercise of students’ franchise.

Aside from being excellently transparent, the system has equally enabled students to be anywhere and conveniently cast their votes for their candidates, unlike in previous years when there would be huge number of students clustered around the campus premises, causing chaos and vandalising campus property.

He used the opportunity to thank the Ministry of Tertiary and Higher Education (MTHE) Directorate of Technology for working with IPAM to enhance a system that will stand the test of time.

According to MTHE’s Director of Technology, Victor Sesay, the event is the cradle of innovation, as IPAM has made history.

He encouraged the University Administration and students to embrace the advantage, adding that the days of chaotic elections at IPAM have been laid to rest.

He envisioned replication of the same online voting approach in other institutions of higher learning across the country in their respective SU elections.

IPAM’s Deputy Registrar, Brima Bah, registered his appreciation to the entire student body for believing in the process, adding that it is important in terms of taking the USL into the 21st Century along with other universities across the world that are now into fully digitized systems of operations.

“We are very happy that we have been able to pilot it here at IPAM for electioneering. I believe that our sister colleges and even other universities in the country will definitely be taking this on board,” he said.

In exercise of the powers conferred on the Chief Electoral Commissioner, Madam Susan Fatmata Bundu, by Chapter Three Article XI of the Students’ Union Constitution, Anthony Mustapha Sannoh, who polled 82, the highest number of valid votes cast, was duly-elected President of the Institute of Public Administration and Management Students’ Union.

IPAM Management and students thanked the Ministry of Technical and Higher Education (MTHE) for supporting the introduction of an online voting system for SU elections at IPAM for the first time in the history of the country.

A close source revealed that other institutions of higher learning across Sierra Leone are seeking expertise from IPAM for the setting up of a similar system.