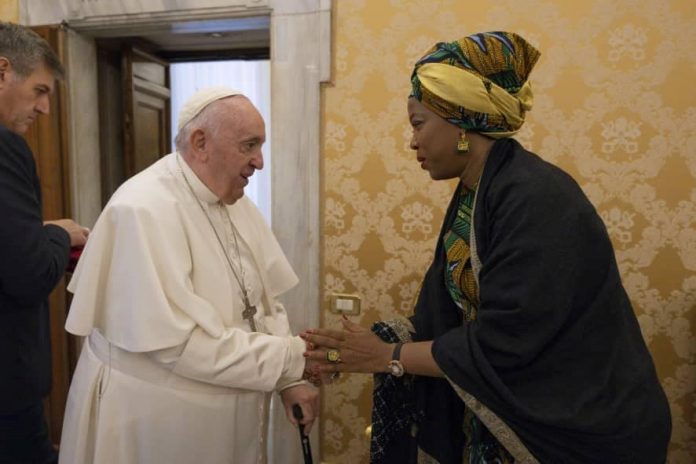 The First Lady of Sierra Leone, Dr. Fatima Maada Bio was on Saturday 19th November, 2022 celebrated by His Holiness Pope Francis at The Vatican in Rome, Italy.

After her meeting with the Pope, First Lady Dr. Bio said: “One of the most fulfilling parts of this journey to get the UN Resolution on November 18, is the fact that as a Muslim Woman, I was able to get all the major religions to support us in the achievement,” she stated.

“This morning, with humility, I was received by His Holiness Pope Francis at The Vatican alongside selected children from around the World, adult survivors of Child Abuse and some Sierra Leone diplomats and distinguished citizens.”

Dr. Bio was warmly welcomed at The Vatican by Cardinal Sean O’Malley.

In similar development also while in Rome, Dr. Fatima Maada Bio met with the President and Executive Members of the Sierra Leone Community in Rome (SALCOM Roma) at her Hotel Suite where she was lodged during her ongoing trip to Rome and The Vatican.

Madam Silvia Saccoh, the SALCOM-Roma President and her entire Executive Members told the First Lady they were there to congratulate her and thank her for her hard work for the country especially her recent Historic Address to the United Nations that resulted in a historic declaration of “November 18” as a special Day for the World.

Referencing her recent stellar participation in a series of events in Rome, SALCOM-Roma said: “Thank you for making us Proud as Sierra Leone citizens in Rome”.

Rounding up their points, the SALCOM Roma members asked the First Lady to strengthen ties between the Government and SALCOM-ROMA so that during times of need such as any natural disasters back home, SALCOM Roma will be recognized to mobilize support to send back to help affected compatriots.

In her response, the First Lady has promised her visitors that she will continue to live up to their expectations as she serves under her husband’s Leadership and Guidance. She agreed that SALCOM-Roma needs to get registered with pertinent Government agencies back home.

Dr Fatima Maada Bio extensively spoke about her husband’s vision for the country especially his focus on developing Human Capital of Sierra Leone people through his Free Quality Education initiative and the ongoing positive expansion of Tertiary Education across Sierra Leone which has led to global recognition for Sierra Leone as leaders in pushing for Global Education reforms.

Mrs. Maada Bio said her husband was inspiring the World on Education which she said was key to human capital development.

Amongst other issues, the First Lady also informed about the “Hands Off Our Girls” campaign which has helped to protect many young girls in Sierra Leone from vices of early marriage, teenage pregnancy and sexual exploitations.

Whilst highlighting her supportive role to her husband, Dr. Fatima Maada Bio further informed about the ongoing construction of enhanced facilities at the 34 Military Hospital complex including a 500-Bed Hospital, an Excellence Center of Refuge for Victims of Sexual Crimes, a brand-new Nursing School and a proposed Medical School amongst others. She said all of the aforesaid infrastructure were funded without a single cent of Government or Taxpayers money. Rather they were being funded primarily through her fundraising efforts.

She concluded by encouraging Sierra Leone citizens in Rome to cajole investors that Sierra Leone, through the leadership of H.E. President Bio, is open for credible investments.

H.E. First Lady Dr. Fatima Maada Bio is on a visit to The Vatican and Rome which commenced on 17th November 2022. She has been given a global award, participated in a High-Level Panel discussion, worshipped at one of the oldest churches within the Vatican City and met with His Holiness Pope Francis. She is expected to return to Sierra Leone shortly.

The First Lady was accompanied by a high level delegation including Dr Sylvia Blyden – former Minister of Social Welfare, Gender and Children’s Affairs.