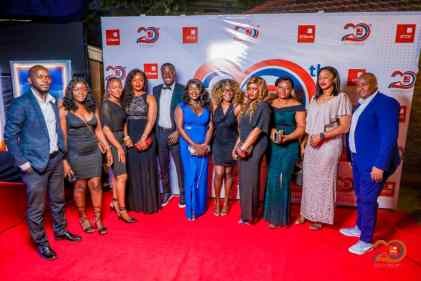 Guaranty Trust Bank Sierra Leone has hosted a dinner party in celebration of its 20th anniversary at the country Lodge hotel on the 25th November 2022. The dinner was attended by Senior Government officials, staff, customers, businesspersons amongst others.

Speaking at the occasion, the Managing Director at GTB (SL), Ade Adebiyi acknowledged that without the support of its customers, there will be no Guaranty Trust Bank.

He pointed out that “Tonight actually marks the hall mark of our activities that we have been doing throughout the year, to mark our 20 years anniversary. How time flies that baby of 20 years ago is now 20 today. It’s an achievement, it’s a mile stone. The vision of the Bank actually started in 1999 when the Parent bank then did its initial public offer in Nigeria and they got the universal Banking license that gave them the opportunity for their African expansion and the first country that they went to was Gambia in the year 2000. In 2002, the group came to Sierra Leone to take advantage of the economic development. It is important that as we celebrate today, we remember those people that were with us at the beginning but were not with us anymore, but they have contributed immensely to what we are celebrating today.”

As part of their efforts to give back to society and to strengthen their bond with customers, The Head of GTBank Corporate Affairs, Arthur Kallon alongside the head of Small medium Enterprises Mrs Kelwina Martyn awarded Plasma, Freezer and other electrical appliances to seven successful winners of the GT Bank “Keep For The Bambai” campaign.

In his statement, Kallon pointed out that “being the all-inclusive bank we are, some few months ago we launched a deposit campaign. That goes to show how much we care for our customers. But this one is for our regular people. What we did three months ago is to launch a regular program called Keep for the bambai which simply means “Save for the future.”

“I think it has been achieved today when you look at 22 years down the line and so honestly. GTB has been there throughout that period for 22 years. And during that period, we actually as a bank contributed our quota towards the development of the country by providing financial services to all sectors across Sierra Leone. I think one of our difficult moments was during the Ebola and the COVID but despite that, we were able to achieve all our targets and that’s because of the resilient nature of GTBank as a Bank. And again, it all boils down to the customers and staff of this great organisation.”

Adebiyi further added that the Bank can now boast of 16 Branches, 263,000 customers with shareholders’ funds of 30 million dollars. He confirmed that if not for the depreciation in the currency, it would have been over a 100 million dollars and with a profitability of 10 million dollars.

Speaking about the Bank’s corporate social responsibility, the Managing Director acknowledged that they are also thankful that they have not forgotten to give back to society that needs them so much.

“We were in the forefront of both during the Covid and the Ebola crisis. We have always been there every year support the breast cancer victims. It is something that is very close to us. Not surprisingly when we watch the video, there are people that also notice that we are doing things well. In 2018, we got two awards from the European Magazine and the International Banker. In 2019, we got six awards so we must be doing something right and we will continue to do this these things right.”