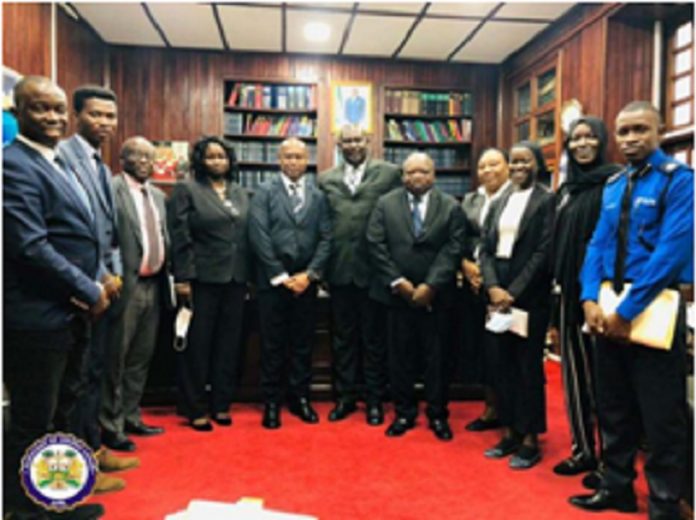 The Gambian Solicitor General, Hussein Thomasi, has informed the Hon. Chief Justice, His Lordship Justice Desmond Babatunde Edwards that he is impressed with the massive reforms at the Judiciary including the establishment of the first Anti-Corruption Court in the country to expedite Corruption cases and its related offences.

The team from Gambia which comprises the Chief Superintendent of Police in charge of the International Criminal Police Organisation (INTERPOL), Pa Alieu Jawara; State Counsel, SaffiatouNyang; Officer Commanding in the Department of Prosecutions and Legal Affairs, Abdou A. Manneh and Civil Society Activist, Fanta Sanneh is in the country on a study tour ahead of the establishment of The Gambia’s first Anti-Corruption Commission.

“My Lord Chief Justice, we are grateful for the opportunity amid your busy schedules to give us audience,” the Gambian Solicitor General Hussein Thomasi said, adding that, “On behalf of the Hon. Chief Justice and Attorney General, I must state here that we are impressed with the reforms at the Judiciary and the support to the Anti-Corruption Commission in the fight against Corruption.”

He said Sierra Leone and Gambia share a lot of commonalities, noting that they have hugely benefited from Sierra Leoneans at all levels including building the human resource capacity of Gambians.

“We are here to learn from Sierra Leone and we are going to replicate the good things we have learnt so far,” he said.

The acting ACC Commissioner, Augustine Foday Ngobie said the ACC has been so progressive because they are enjoying huge support from the Judiciary.

He told the Hon. Chief Justice that the Gambian team said they were impressed with the progress and therefore saw the need to visit and learn from Sierra Leone.

Welcoming the team from Gambia, the Hon. Chief Justice said that one of the ways an institution progresses is through information sharing and study tour, reiterating that their visit was timely.

While commending The Gambia for being thoughtful to establish an Anti-Corruption Commission, the Hon. Chief Justice Edwards said, “today we have established an Anti-Corruption Division Court with an independent Registry and eight Judges being assigned to adjudicate on cases before the Court.”

He encouraged them to secure the Sierra Leone 1991 Constitution, ACC Act and the High Court Divisional Orders as a guide for establishing the ACC in The Gambia.

“We are making steady progress but that is not enough, our aim is to be rated first in Africa in the MCC Scorecard and other international indexes,” said the Hon. Chief Justice.