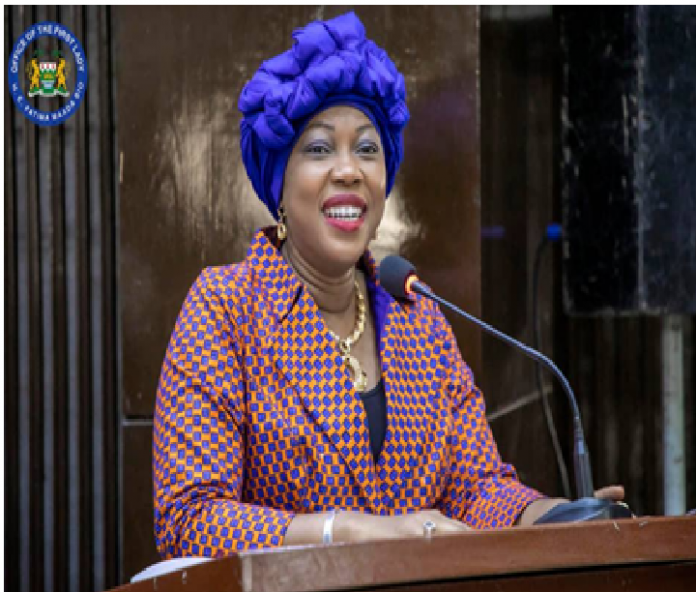 Executive Director of UNAIDS, Madam Winnie Byanyima has offered a proposal to the First Lady of Sierra Leone, Mrs. Fatima Maada Bio to serve as the new Face of the United Nations Education Plus Initiative.

The initiative is geared towards allowing girls to go through formal education and further teach them about sex education and orientation which will ultimately reduce the risk of them contracting HIV.

At a closed-door meeting invitation of the Executive Director of UNAIDS at one of the United Nations General Assembly meeting rooms in New York City, U.S.A, Madam Byanyimaexpressed her delight in meeting Mrs. Bio, whose work she has been following individually.

She said she was humbled to be discussing the way forward of girls and education in the African continent, as that is one of the key priorities of the United Nations.

Mrs. Winnie gave a highlight of the activities of Mrs. Bio she has been following and how amplified and authentic her voice has been in the protection and empowerment of girls in Sierra Leone, as she continues to impact and influence other nations to replicate what she does in her countries.

According to the executive director, she was overwhelmed with the speech delivered by President Julius Maada Bio at the United Nations General Assembly, specifically how passionately he spokeabout girls right to education and inclusivity in his human capital development agenda and how hespoke with clear first-hand evidence of the progress his government continue to make in that direction.

She confirmed how impressed she was left, after Mrs. Bio spoke passionately, with great knowledge on sexual violence and issues affecting adolescents in the African continent. She added that her voice is authentic and the UNAIDS team would love to work with her as a fearless first lady using her voice and platform to address issues of inequalities affecting girls.

Responding to the executive director, President Julius Maada Bio expressed his sentiment on behalf of the first lady, while ascertaining the invitation and offer proposed to her is timely and quite prudent.

He gave clear evidence of the work Mrs. Bio does in Sierra Leone and how she has succeeded in breaking the societal taboo of not talking to girls about sex education and reporting their abusers in cases of rape and sexual penetration.

President Bio said Mrs. Bio deals with the advocacy aspect of narrowing the inequality gapsthrough the Hands Off Our Girls campaign, while his government works on the right policies andimplementation to give girls an equal chance to be educated and empowered.

Highlighting some of the key achievements of his government, President Bio mentioned the One-Stop-Shop Centres for rape victims, the special sexual offences court for rape cases, the exceptional advocacy work of the HOOG campaign by the first lady and the overturned of the ban on pregnant girls accessing school after giving birth.

He stated that statistics have shown exponential progress on the results from girls returnees in schools and much higher retention of girts due to the intervention of the first lady’s Free Sanitary Pad initiative, as she established herself with the girts so much that they feel confident to open up and share their everyday realities with her.

President Bio pledged his government’s commitment to work with the UNAIDS agenda, while notingthat Mrs. Bio’s involvement will be pivotal in achieving great success of the initiative, due toher resounding, authentic and captivating voice that speaks to the hearts of many.

First Lady Mrs. Fatima Maada Bio warmly appreciated the reception of Madam Winnie, while noting that her advocacy toensure every girl has equal right and access to education is stem from her personal ordeal.

She said herpassionate campaign has garner lots of attention from the country’s capital city to the last village and town in Sierra Leone.

She mentioned the commitment of the paramount chiefs, religious leaders, community leaders, parents, girls’ rights movements and civil society activists, whom she continues to work with to create more impact.

Mrs. Bio pledged her commitment to work with UNAIDS, as their concerns are genuine and should allow radical inclusion like what President Bio is doing in Sierra Leone. She added that her office works mainly to prevent girls from not getting pregnant and have an equal and fair opportunity to stay in school like their male colleagues.

The first lady said with the way the world is transiting girls most times prefer to seek answers concerning their sexualities or its related components from outside the home, which she said is due to the lack of adequate parental communication on sex education and personal hygiene.

Mrs. Bio said the need to work aggressively in eradicating such myth from society, when it has to do with sex education for girls.