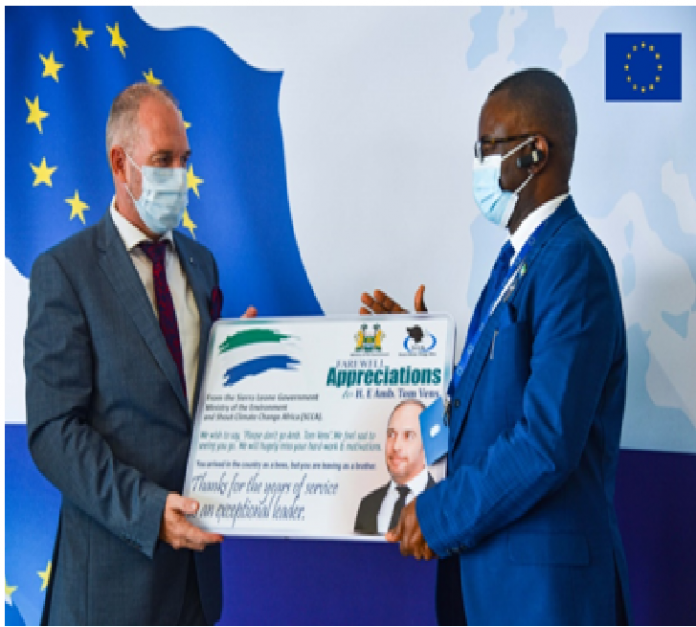 In the final days as EU Ambassador to Sierra Leone, Tom Vens has been honoured as an environmental champion by Sierra Leone’s Ministry of Environment and Shout Climate Change Africa (SCCA), with a special recognition award.

Sierra Leone is among the three most vulnerable countries to experience the adverse effects of climate change. In recent years, the country has been struck with many environmental challenges.

Presenting the award to Ambassador Vens, the Minister of Environment Prof. Foday M. Jaward on behalf of President Bio ‘s Government said, “We appreciate you as EU Ambassador to Sierra Leone and for all the outstanding initiatives and interventions you continue to support in the environment sector, particularly in tackling environmental and climate change issues in the country.”

Minister Jaward pointed out that the issues of environmental degradation and climate change are serious challenges the country continues to experience, but recognised that the strong collaboration between the government and EU could help to surmount these challenges.

He said President Bio remains very passionate about the environment which is an important pillar to achieving the Sustainable Development Goals (SDGs), hence the creation of the first-ever Ministry of Environment, to focus specifically on developing and implementing policy actions for environmental protection.

Founder and CEO of Shout Climate Change Africa, Finnex J. Asibor, who was part of the delegation, congratulated the Ambassador for successfully completing his tenure of office in the country, referring to him as an environmental hero and a strong ally to the global cause. “We love you, and will miss you!”

Ambassador Vens expressed appreciation particularly to all the delegation’s staff for the hard work that led to the recognition, noting that environmental issues remain at the heart of what the EU does globally, and also in Sierra Leone.

He said the EU development policies put strong priority on environment and climate change issues across the world because they are the most contentious issues that humanity has to deal with as a global community, due to the existential threat it poses to humanity.

He expressed optimism that with effective collaboration and strong partnership in the policy environment, more could be achieved to mitigate the impacts of the scourge not only in Sierra Leone but across the world and pledged the EU’s unwavering support to the sector.

As a strategic development partner, the EU continues to support initiatives that strengthen the country’s environmental resilience by working with the Government of Sierra Leone, communities and partners in the sector for inclusive and sustainable environmental management.

In early June this year, the EU signed a 2.9 million Euro grant for the management of the OutambaKilimi National Park – a transboundary forest landscape linking Guinea and Sierra Leone to preserve the country’s flora and fauna and conserve her natural resources.

The EU was also very instrumental in supporting the establishment of the Gola Rainforest National Park in 2011 – a park that now assures a new income stream to Sierra Leone from the sale of carbon credits. This is in addition to several other environmentally sensitive initiatives including restoration and conservation of wetlands and mangroves in Yawri Bay and the Sierra Leone River Estuary. These actions are critical in supporting livelihoods sustainably, in local communities.

The EU’s development partnership with Sierra Leone has increasingly focused on programmes that contribute to sustainable economic diversification, among others through actions that support access to sustainable and clean energy, resilient food systems and the protection of ecosystems and biodiversity.