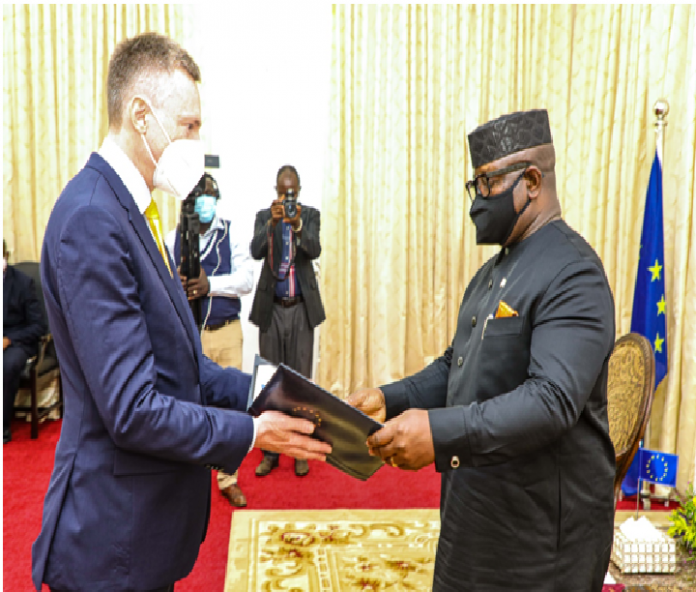 The new Head of European Union Delegation to Sierra Leone, Manuel Müller presented his letters of credence to President Julius Maada Bio, in a ceremony at State House.

President Bio said that the EU is a strong partner of Sierra Leone, and Sierra Leone is deeply grateful for the EU’s longstanding support to the country. He added that the Sierra Leonean Government is committed to continuing to implement the reforms that will make a “vibrant democratic nation”, and the Government will follow up on the implementation of the electoral reform recommendations of the EU Electoral Observation Mission deployed to Sierra Leone in 2018.

He stressed that Sierra Leone values the support of the EU to address the challenges that lie ahead.

Ambassador Müller said that the partnership between the EU and Sierra Leone is strong and based on shared values.

He added: “The EU will continue to be a reliable partner of Sierra Leone, including democratic and electoral support”.

In this regard, after the Electoral Observation Mission deployed in 2018, an Electoral Follow-Up Mission led by a member of the European Parliament will visit Sierra Leone in October, which will be an opportunity to monitor and discuss together with the Sierra Leonean authorities progress in electoral reform before the 2023 general elections.

Ambassador Müller also said that the EU acknowledges the important efforts and reforms made by the Sierra Leonean Government to strengthen the rule of law and protect human rights, like the recent abolition of the death penalty.

The EU remains committed to continuing to work together with Sierra Leone to strengthen democracy, elections, rule of law, education (including girls’ access to education), an enabling business and investment climate, and job creation.

The EU encourages the Sierra Leonean Government to continue progress in these areas. Following the work of his predecessor, the new Head of Delegation aspires to continue to deepen the EU-Sierra Leone partnership.

The EU welcomes the active role of Sierra Leone in the region and ECOWAS. The Head of Delegation said the EU aims to strengthen cooperation with Sierra Leone on multilateral fora.

He also advocated for the participation of Sierra Leone in the initiative “Leaders Pledge for Nature”.

In the last Political Dialogue between the European Union and Sierra Leone, chaired by President Julius Maada Bio and held on 13 July 2021, the EU and Sierra Leone reconfirmed their commitment to a robust and ambitious partnership based on shared values and priorities.

Both parties addressed issues of mutual interest, including sustainable investment, the empowerment of women and girls and the environment. The partners also discussed progress towards governance reforms and the human rights agenda, electoral reforms and the constitutional review process, developments in the democratic space, migration and prospects for the future of EU-Sierra Leone cooperation.

The EU is working with Sierra Leone in the areas of governance, education, agriculture and infrastructure. In the next years, the EU will also work with Sierra Leone on promoting a green economy, human development, governance and public finance management.

Youth, women and girls will be the focus of the EU’s interventions. The EU is stepping up its overall resources to strengthen its partnerships in the world.

Ambassador Manuel Müller is a staunch advocate of gender equality and women and girl’s empowerment.

Before his assignment in Sierra Leone, he has been German Ambassador to South Sudan, and Deputy Head of Division for Sahel, West and Central Africa at the German Foreign Office.

He has also been assigned to the German Embassies in Bolivia, Ukraine and Democratic Republic of the Congo (DRC).

He holds a Master of Arts in Political Sciences by the University of Trier in Germany.