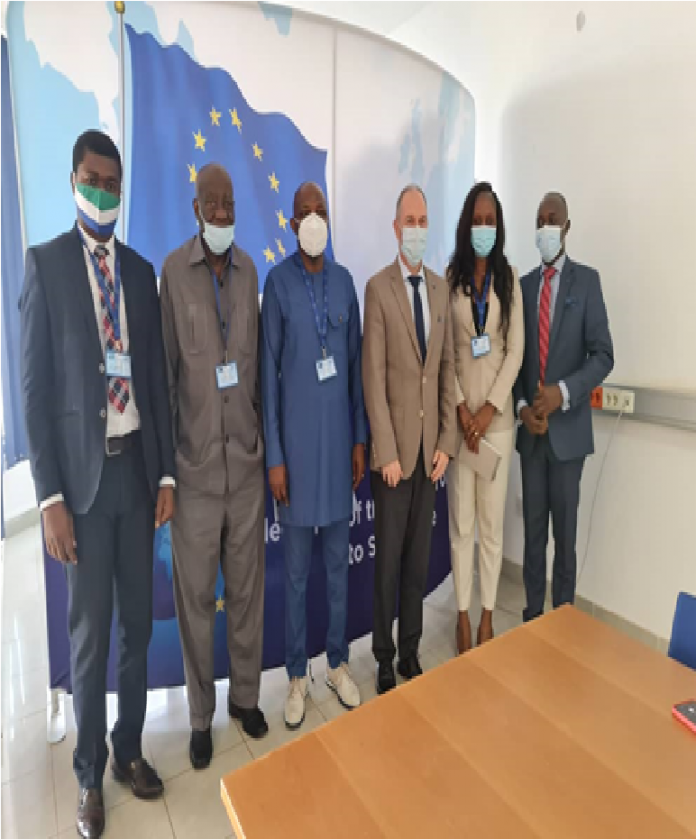 By Department of Public Relations, Parliament

The Sierra Leone Parliamentary Delegation to ACP-EU has paid a courtesy call on the European Union Ambassador to Sierra Leone, H.E. Tom Vens to commend him for his positive contributions toward enhancing good governance and democratic processes in Sierra Leone.

Leader of Delegation to ACP-EU, Hon. Mathew Shar Nyuma, who doubles as Leader of Government Business in the Sierra Leone Parliament, on behalf of Parliament commended EU for their positive contributions relative to the governance processes in country; citing capacity building and infrastructural development.

He also acknowledged the role played by the EU Delegation in light of the Cotonou Agreement; saying it played a pivotal role in the consolidation of peace, security and democracy in the country.

Speaking on the need for continued dialogue in a democratic space, he said: “We do appreciate the good work EU is doing for Sierra Leone”.

Submitting, Hon. Ibrahim Ben Kargbo, Deputy Leader of the Opposition commended the EU for supporting Sierra Leone in diverse ways relating to development; adding that EU had contributed immensely to the   structures of democracy in the country.

He said as an opposition, they are playing their respective and expected role towards development efforts for country.

Leader of C4C, Hon. Saa Emerson Lamina also praised the contributions made by EU toward the consolidation of peace and development in Sierra Leone; and outlined the role of the Parliamentary Delegation to the ACP-EU Parliament.

Speaking on expanding trade in light of liberalisation, he advocated for Sierra Leone’s fishing industry to gain access to the EU market.

He thanked Parliament  for exhibiting leadership through the implementation of “The Bo Declaration”; describing it as a good spirit aimed at moving and shaping the nature of democracy in Sierra Leone; underscoring a  point that, EU is happy for supporting the consolidation of peace, democracy and stability in the country.

He called for diversity in development, and added that EU would be focused on supporting education, good governance and the marine sector.

He also called for limitless collaboration in the legislative processes of the country and spoke on the importance of enacting a cyber-security and data protection Bill into law for the development, protection and safety of individuals and the country.