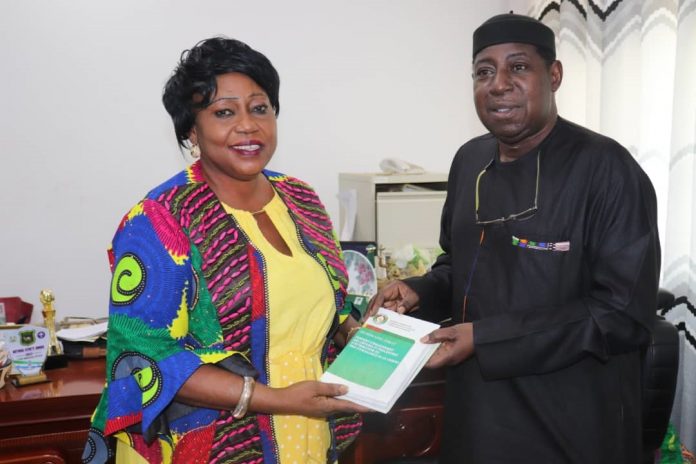 A delegation from ECOWAS has in an engagement with the Ministry of Tourism and Cultural Affairs and other state actors explained the criteria and procedure for the grant of the ECOWAS prize of excellence and the restitution of cultural properties. The engagement was done at the Ministry’s Head Office, Kingharman Road, Freetown.

The ECOWAS prize of excellence shall seek to recognise excellence and honor individuals or legal entities who through their activities, creativity and service have immensely contributed to promoting regional integration, peace and socio-economic development in the ECOWAS region.

The prize shall comprise 3 categories; award for science and technology, arts and letters, award of honor for distinguished personalities, award for deserving citizens of the community.

Welcoming the delegation to the Ministry, the Minister of Tourism and Cultural Affairs, Dr. Memunatu Pratt appreciated the team for visiting Sierra Leone and informed them that the Ministry has ratified all the six UNESCO conventions with no deficit.

She said they are putting a handful of experience people to do the selection of those that will be competing for the awards and advice government as to which ones are qualified. She said they are creating a forum to get more people interested and also a national selection committee for the different categories.

On the return of the restitution, she said they are working with Sowad and other groups to get their stolen artifacts back. She said they have returned boxes of stolen items from Sierra Leone to the national museum, hence she is running with this big museum idea.

The ECOWAS Director of Education, Science and Culture, Professor Abdoulaye Maga said ECOWAS award of excellence was established by Head of States in 2017 taking into account key categories; high personalities, deserving citizens and the technical categories.

He noted that after the first two editions of the awards, they discovered that some countries are not applying much and also not respecting the criteria for application, hence they were mandated to go round the region to raise awareness about the awards to ensure countries apply properly and avoid any disqualification.

The Director of Culture, Foday Jalloh who has been part of the award process for the past two editions said it was better the ECOWAS delegation were in Sierra Leone and for the very first time they were able to bring people from all walks of life within arts and culture to get first hand understanding from the team from ECOWAS, a step which he said will add enthusiasm and impetus into the process.