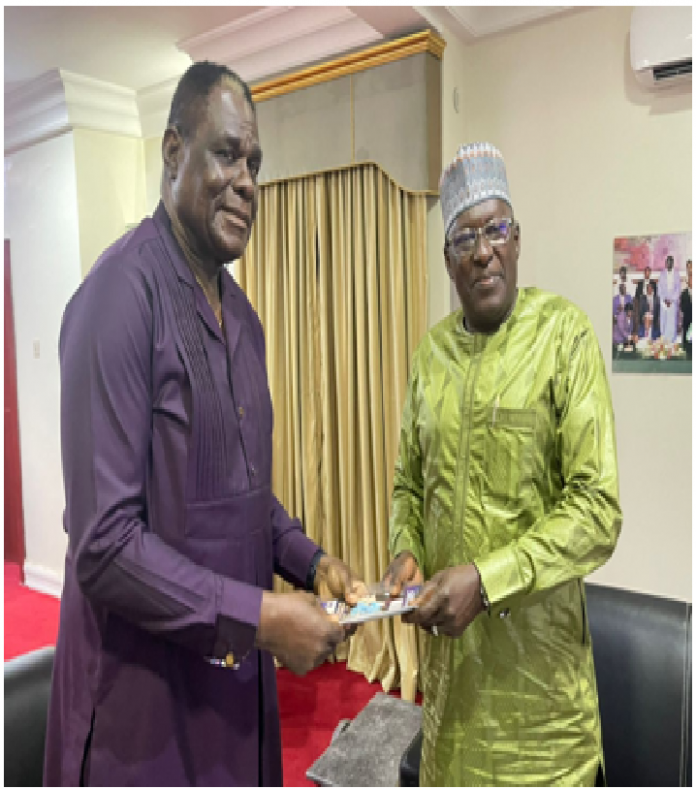 Welcoming Dr. Sidie Mohamed Tunis, H. E. Rupert Davies stated that, he was excited to have received the Speaker not as guest but a brother to the Sierra Leone High Commission as part of his first official visit to meet with all staff for better acquaintances.

“We want to assure you that the Sierra Leone High Commission here in Nigeria will always collaborate with you in the exchange of views and ideas aimed at bringing laurels to Sierra Leone”, H.E. Rupert Davies stated.

He informed the ECOWAS Speaker of Parliament that, since he arrived in October 2021, to serve as High Commissioner to the Federal Republic of Nigeria also accredited to ECOWAS and six other regional countries, he has been working hard to further strengthen the historically strong bilateral ties between Sierra Leone and the federal Republic of Nigeria.

H.E. Rupert Davies then went on to  express confidence that in the wake of his presentation of credentials in the Republic of Cameron, he would soon  be able to present his letters of credence to Benin and Equatorial Guinea as all the preparations  leading towards that Presentation are now in their final stages.

On his part, the Honourable Speaker of the ECOWAS Parliament Dr. Sidie Mohamed Tunis thanked High Commissioner H.E. Rupert Davies, and the Diplomatic and local Staff of the Sierra Leone High Commission in Nigeria for their inexorable services on behalf of the people of Sierra Leone.

Honorable Sidie Mohamed Tunis said his courtesy call visit was timely and appropriate adding that he would use it as an opportunity to update the High Commissioner Rupert Davies on what happened on August 10th regarding the insurrection in certain areas in Sierra Leone.

“On August 10th some unpatriotic Sierra Leoneans decided to go on a violent protest, looting, killing civilians and security personnel, fortunately for our country the security forces were able to put everything under control”, he stated.

The ECOWAS Speaker assured all that, the situation in Sierra Leone is now calm and quiet and that the Government of President, Julius Maada Bio, is currently engaging various stakeholders at all levels, in a spate of serious national dialogue, discussing possible  pathways to sustain the peace and national cohesion in the country.

Honorable Sidie Mohamed Tunis further stated that President Julius Maada Bio has always followed the pathway to peace and national cohesion referencing the National Dialogue Forum in May 2019, dubbed ‘Bintumani III’ which was called to bring Sierra Leoneans together but unfortunate the main opposition members boycotted the event.

He described the High Commission in Nigeria as strategic and referred to it as “a major diplomatic mission in the sub-region”.

As part of programme of activities for his visit, H.E. Rupert Davies presented two copies of a maiden magazine of the Sierra Leone High Commission to the ECOWAS Speaker of Parliament Honorable Sidie Mohamed Tunis.

The magazine catalogues activities undertaking by the High Commission in Nigeria and the Government of President Julius Masada Bio.