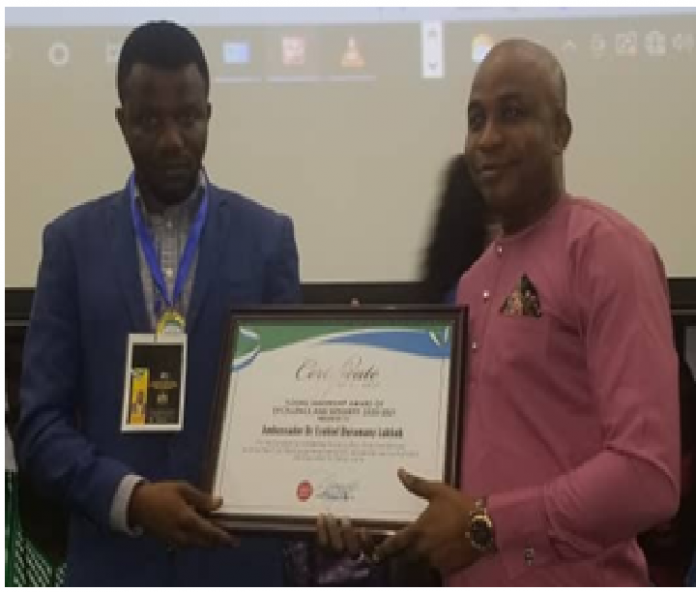 The honor is for the role the youngman has played and continues to play in developing the lives of young people in achieving good governance, leadership and sustainable development in Sierra Leone.

Serving also as Executive Director for the Institute Research and Policy Management and Dean Faculty of Management Sciences University of Sierra Leone, Dr. Duramany-Lakkoh was awarded for his excellent leadership in education, financial services that have contributed to the transformation of young people’s lives.

Member of African Achievers Awards, Francis Conteh said the Award is to honor and celebrate young personalities with excellent and integrity.

He said the Award has consistently honored great Africans in leadership, young achievers, philanthropists, politicians and academia across the continent.

“The Award has been hosted in Ghana, UK, Tanzania, Nigeria and Sierra Leone among other countries. The Award ceremony has fast been established as one of the biggest gathering of influential and global African Achievers in the African continent and western world.” Mr. Conteh stated.

He went on that this year’s Award pleases the award body to recognised, honor and celebrate young people that are doing extremely well as Youth Ambassadors for Peace and Socioeconomic Development across the 17 African countries they operate as organisation.

According to him, the International Young Leadership Award of Excellence and Integrity will be hosted in Nigeria later this year and that Sierra Leone is already qualified to nominate five people for the Award.

Director of Communications at African Achievers Award, Michael Okentu Bangura said organisation started 10 years ago in Nigeria to unearth the successes of young people and award them for their good work.

Bangura said: “We have more than 50 persons that were nominated for the Awards. Consultations, observations and nominations were done to select final nominees for the Award. The Award will motivate other young Africans, particularly Sierra Leoneans to be more productive in what so they do”.

He said he was surprised that there were people monitoring his good works and activities in the country, noting that he was optimistic of winning the Award but that he would not have surprise if he had not won the Award considering the strength of other nominees.

He went on to say presently he has a lot of projects going on most especially to inspire people through education and business.

“My biggest plan now is to revolutionise the financial platform in the country through my GIT capital. With GIT capital we have lots of young people that are using financial corridors to start their own businesses and develop themselves personally.” Dr. Duramany-Lakkoh stated.

Other recipients of the Award were the District Medical Officer in Kenema district, Minister of Sports and other personalities.