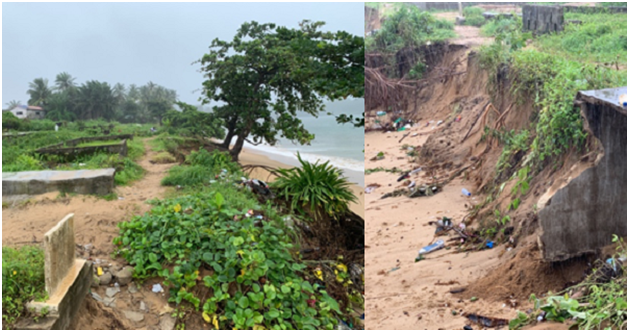 The persistent illegal sand mining on Ober Funkia Police Beach in the Western Area Rural District has seen the destruction of graves, thereby leaving corpse swimming on the beach.

Following the uncontrolled illegal mining on the beach, whenever it rains heavily, flooding occurs and washed away human corpses and coffins from their graves.

She said they have raised numerous concerns over seeing corpses of their loved ones being washed away by the sea tides, but that to date, noting have been done to address the issue.

Mustapha Sesay is a local fisherman in the community. He said the issue of illegal sand mining on the beach has become more alarming than the previous years. He said when miners dig out layers of sand, river bank become less stable and more dangerous.

Councillor for Ward 386 in Consistency 109, Mohamed Mansaray popularly known as Med De Guy said as a stakeholder, he has personally tried to secure the cometary from the floods but that the wild illegal sand mining could not help.

He recommended that beach guard posts be established to man the beach.