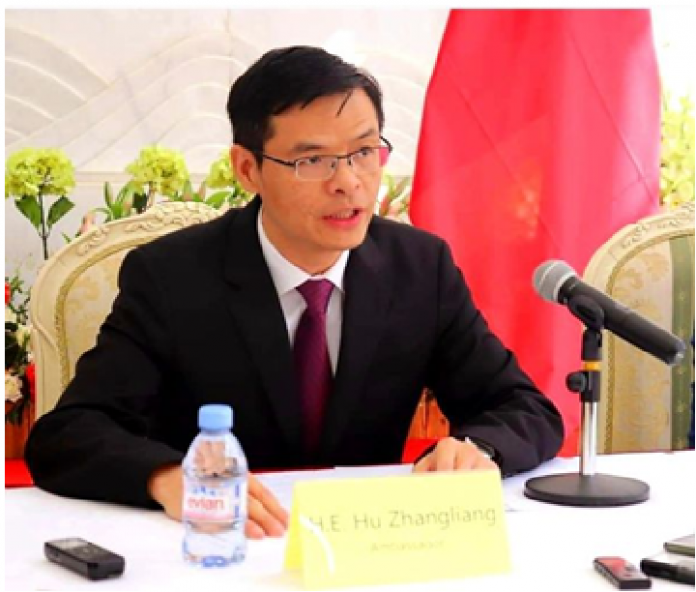 In the one hundred years since it was established in 1921 the Communist Party of China has made immense contributions to the phenomenal transformation of what was once an underdeveloped, feudal China and its more than 1.4 billion people.

In an interview with the Chinese Ambassador to Sierra Leone, His Excellency, Hu Zhangliang, he outlined in detail the formation of the CPC and its impact on China’s modernization since 1921.

Ambassador Hu started off by stating that the founding of the Communist Party of China was an epoch-making event that profoundly changed China’s history and the nation’s future. That, he said, had an enormous impact not only on the people of China but also on the rest of the world.

Ambassador Hu continued that as a galvanizing force for progressive, dynamic change of what before was a semi-feudal state ruled by hundreds of competing warlords, the CPC which came into being in 1921 has been at the vanguard of China’s bold step into a modern age of political, economic, social and cultural development, which has taken China and its people through a period of dramatic change.

During that process, Ambassador Hu continued, the CPC has grown from a small party with just over 50 members into the largest governing party in the world with more than 95 million members in a country with a population of more than 1.4 billion people.

Enjoying extensive support from the Chinese people, he further said that the CPC is a party of major international standing that has governed the world’s largest socialist country for more than seven decades.

Ambassador Hu said the Party has led the Chinese people onto the path towards national rejuvenation and modernization.

He maintained that as the political beacon for China and its engine of growth and development over the past hundred years, all the struggles, sacrifices and efforts made by the CPC and by the Chinese people under its leadership have been directed to one goal – the rejuvenation of the Chinese nation. CPC’s leadership of China, he added, has witnessed profound and transformative change made possible by the CPC.

Thus, since 1921, enormous productive forces have been unleashed, social transformation unprecedented in scale, and huge advances in human civilization made while the rest of the world has been afflicted by devastating wars and suffering.

Outlining China’s ancient civilization, Ambassador Hu disclosed that China’s remarkable history dates back more than 5,000 years, during which it has made an indelible contribution to human civilization. He narrated that after the Opium War of 1840, China was plunged into a semi-feudal and semi-colonial society; enduring intense humiliation, its people pushed into darkness, and its ancient civilization lost its way.

Resiliently however, the Chinese people fought with indomitable spirit against repeated setbacks to save the nation from subjugation. On how the CPC came about, Ambassador Hu said the CPC was born out of Russia’s October Revolution in 1917 that brought Marxism-Leninism to China.

This epoch making event, he said, woke up the people and lit a torch for the rejuvenation of the Chinese nation.

Ambassador Hu outlined that the CPC through its ups and downs in the last one hundred years has developed a great spirit of upholding truth and ideals, stayed true to its founding mission, fought without fear of danger and met the people’s expectations. That spirit, he said, continues to inspire the CPC to forge ahead.

On those that founded the CPC and kept it going in its formative days, Ambassador Hu named Mao Zedong, Deng Xiaoping, Jiang Zemin, Hu Jintao and Xi Jinping as the chief representatives that adapted the basic tenets of Marxism to China’s realities and its traditional culture. This, he said, enabled them to go from victory to victory on their journey towards national rejuvenation.

On how the CPC has been able to politically emancipate China in the hundred years of its existence, Ambassador Hu said that to realize national rejuvenation, the Party led the Chinese people to fight with unyielding determination to achieve great success in the New Democratic Revolution from 1919 to 1949.

He narrated how the CPC’s armed revolutionaries through fighting the Northern Expedition, the Agrarian Revolutionary War, the War of Resistance Against Japanese Aggression, and the War of Liberation defeated the counter-revolutionaries, shattered the three mountains of imperialism, feudalism, and bureaucrat-capitalism, and founded the People’s Republic of China (PRC) in 1949; thereby securing the independence and liberation of the Chinese people, allowing the people to determine their future.

This momentous victory in the New Democratic Revolution, Ambassador Hu said, brought an end to China’s semi-feudal and semi-colonial status and the disunity that plagued the country.

Having gained sovereignty over the entire country, Ambassador Hu said that all the unequal treaties imposed on China by imperialist powers and all the privileges they had accorded themselves were abolished. This created the fundamental conditions for realizing national rejuvenation.

Ambassador Hu ended the first part of the interview with him by stating that by successfully undergoing this dogged struggle, the CPC and the Chinese people sent a powerful message to the world: The Chinese people have stood upright, noting that the time of oppression and humiliation is over and would never return.