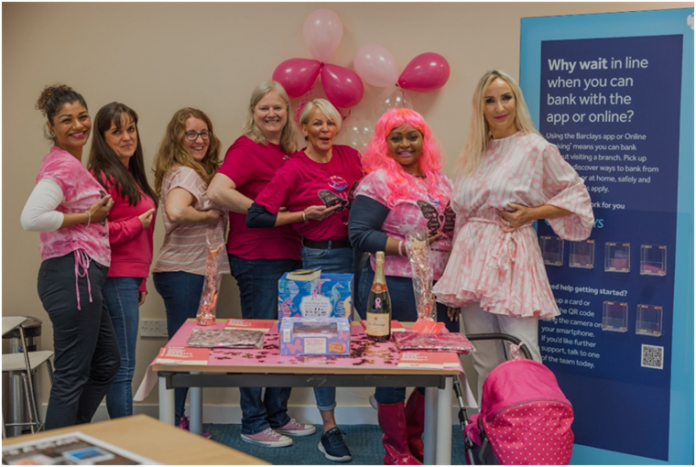 Cancer UK-Salone has successfully held two days “WEAR IT PINK CAMPAIGN” Breast Cancer Awareness as part of its campaign strategy to highlight the importance of engagement and early detection for effective and treatment of cancer.

The first day of the event focused on fundraising and awareness community engagement at Barclays Bank Walthamcross, JP Wetherspoon and Danny’s hair Saloon.

Danny’s Saloon was specifically selected because of the number of black women hairdressers and female clients as the disease incidents are comparatively low in black women as opposed to the white and Caucasian but high mortality rate in black women because of late presentation, lack of knowledge and treatment opportunities.

The second day was witnessed by dignitaries including the Mayor of Broxbourne Cllr Seeby, the Sierra Leone High Commissioner to the UK and Ireland, H.E Prof Morie Manyeh, Sir Charles Walker CBE, member of UK Parliament (House of Commons) and councillors from the Labour and Conservative Parties.

The Mayor stated that early detection saves lives. He encouraged women to attend their screening appointment adding that Covid-19 effects have significantly reduced cancer screening from 71.4% to 54%.

According to the Mayor, innovative strategies of awareness campaigns like the Charity’s event will hopefully help to increase uptake. He ended by saying “this is a great initiative by the Charity, bringing services to the people especially with the help of digital platforms in a digital world.”

H.E Manyeh referred to the name of the Charity, Cancer UK-Salone, drawing attention to its connection to Sierra Leone indicating the relationship between the Charity and Sierra Leone. The High Commissioner said on behalf of Government of Sierra Leone in the UK he was delighted to be part of the event and to join this campaign.

The High Commissioner commended Charity for their bold steps to raise awareness on the cancer disease which affects thousands of women every year. He said he hopes that the campaign will improve on screening uptake. “Early detection can massively increase the chances of survival which is why a fantastic event like this is so important,” he added.

Sir Charles Walker expressed his delight to be in attendance. He applauded the President of Cancer UK-Salone, Ms. Tina Davies, OBE, OOR and said she is doing wonderful things adding that all the high level dignitaries attended the event because of her energy and passion in pursuing her goal.

Mrs Seeby, a 91-old breast cancer survivor, who was diagnosed 30 years ago, encouraged women to have their mammogram as that is how she was diagnosed. She emphasised that early detection saves lives.

Community members and shoppers were thrilled to be part of the event. They supported the Charity’s fundraising awareness campaign by buying raffle tickets, making donations and picking up breast cancer information leaflets.

The President of Cancer UK-Salone, Ms. Tina Davies, OBE, OOR, thanked everyone on behalf of the Charity’s board of trustees for attending and participating. She expressed her gratitude to the management of the Pavilions Shopping Centre in Waltham Cross, in England, for their support in providing the venue and their staff to support the event. She ended by stating that there is a potential collaboration opportunities between cities in the UK and Sierra Leone.

The event was climaxed with cutting of a cake by all the dignities. The Charity aims to run campaigns that focus on tackling the fear of cancer and its symptoms. The key message is that if you think something is wrong it is always better to get checked out to put your mind at rest, or to get treatment that maximises your chances of a good outcome.