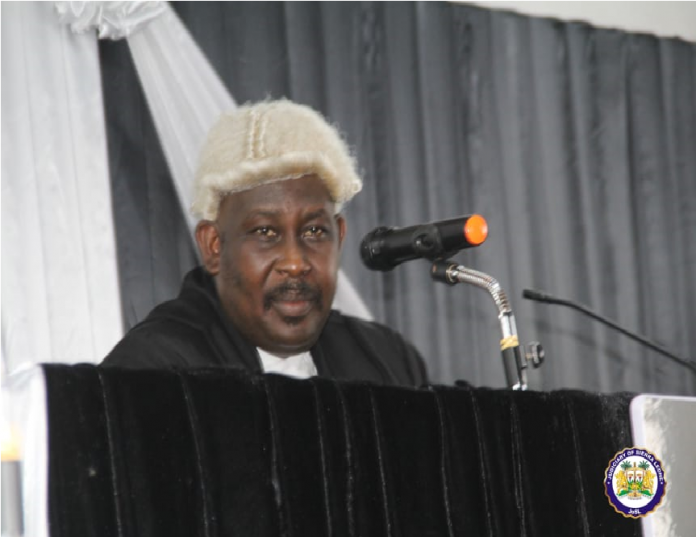 The ceremony was chaired by the Hon. Chief Justice, His Lordship Justice Desmond Babatunde Edwards. The ceremony further brought together Justices of the Supreme, Appeal and High Courts as well as Magistrates. Senior Lawyers including the President of the Sierra Leone Bar Association were in attendance.

In his tearing tribute on behalf of the Bar, the Head of Edrina Chambers, Lawyer Pa-Momo Fofanah said he was saddened to hear the death of his first Pupil Master, a celebrated Diplomat, distinguished politician, human rights advocate and a proven academic. He said his tribute was laced with joy in recounting the recollections of how the late Chief Justice stood against political manipulation of both country and Judiciary of Sierra Leone in pursuit of the rule of law and justice.

He revealed that after being called to the Bar in December 1998, the late Chief Justice inclined the Judicial and Legal Service Commission to advertise for the position of Research Assistants to serve as a model legal research unit for Judges, starting with the late Chief Justice himself. As Research Assistant, he explained that they researched into case law and Jurisprudence to lay out the basis for sound legal reasoning in support of legal and Judicial opinions in rulings and judgements.

He said his emphasis was on the supremacy of the law, the independence of the Judiciary and above all, the need to do and apply Justice to all manner of men, fairly and equitably.

In his tribute, Supreme Court Judge, Justice Nicholas Browne-Marke, said the late Chief Justice was a respectable Diplomat within and outside Sierra Leone. He said he practiced as a successful lawyer even before his appointment as a Chief Justice.